Bayelsa: Reps Back Jonathan On Deployment Of Troops 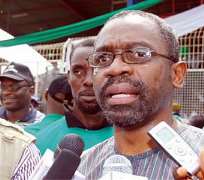 ABUJA, November 22, (THEWILL) - The House of Representatives today affirmed its support for the deployment of armed forces to Bayelsa State as it rejected a motion by the Minority Leader, Hon. Femi Gbajabiamila calling for the removal of the armed forces deployed to the state by President Goodluck Jonathan.

Gbajabamiala had raised a constitutional point of order, alleging that the federal government violated the provisions of section 217(2b) of the 1999 constitution of the Federal Government of Nigeria (as amended) by deploying soldiers to the state. But hardly had he finished when some members started raising objection to his submissions.

Section 217 of the Constitution reads inter alia; “(1) There shall be an armed forces for the Federation which shall consist of an army, a navy, an Air Force and such other branches of the armed forces of the Federation as may be established by an Act of the National Assembly.

The Minority Leader had argued further that the deployment of troops which he said had led to the militarisation of the oil state was unconstitutional as due consultation was not made with the National Assembly.

When he concluded, Tambuwal put the motion to vote on whether the matter was much of public importance to be debated by the House, and members unanimously voted against it in a voice vote.

The Speaker however cautioned the executive arm, just as he urged the Federal Government to always endeavour to guard against constitutional violations as, according to him, both Houses of the National Assembly were not consulted before the deployment.

Recall that the President was severely criticized due to the deployment of federal troops to secure Bayelsa after tension rose when his ruling People Democratic Party (PDP) banned present governor Timipre Sylva from seeking re-election under the party’s platform.