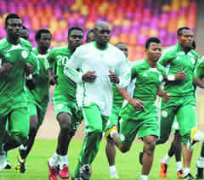 Ex-international, Jonathan Akpoborie, has urged Nigerians not to expect much from the national Under-23 team when the CAF Under-23 Championship kicks off this weekend in Morocco. He said that the squad may not pick a ticket for 2012 Olympic Games football tournament.

Concerned about Nigeria's chances in the Olympic qualifying contest, Akpoborie said Coach Austin Eguavoen did not assemble the right players suitable for such competition, adding that he is afraid he may fail in Morocco.

The Super Eagles' ex-player, said he was not wishing the team bad luck but expressed belief that the technical crew could get the best players from the local league system if it was properly developed to breed talents for the country.

Akpoborie said the kind of players preparing for the event in Morocco would not go beyond their capabilities as some of them were not fit for the competition.

The budesliga's former star said the Dream Team would further add to the woes of Nigerians after Super Eagles and Falcons' recent misfortunes in the Nations Cup and Olympic race.

He said he was sorry for Eguavoen because he was under pressure to deliver and had tried every means to redeem football 's image with his wards in Morocco.

Akpoborie said Nigerians should not put their hopes in the team. The qualifiers would be keenly contested by 8 teams across the continent from November 26 to December 10, 2011 and will serve as a platform for the qualification of the CAF representatives for the London 2012 Football Men's Olympic Games.

The qualified teams are host: Egypt, Algeria, Cote d'Ivoire, Gabon, Morocco, Nigeria, Senegal and South Africa. The eight teams will be divided into two groups of four teams each to play on a round-robin basis with the top two from each group advancing to the semi-finals.

The top three placed teams automatically qualify for the London 2012 Olympic Games, while the fourth placed team will engage a team from Asia in a playoff.