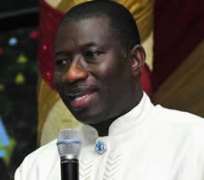 Speaking when the PDP acting chairman, Alhaji Abubakar Baraje led some members of the National Working Committee (NWC) to felicitate with him on his 54th birthday, the President commended them for toeing the path of due process, also expressing optimism that the ruling party would take the country to greater height.

'I commend the party, continue to follow due process, don't be intimidated by anybody as long as you are on the right course. And I believe PDP will lead the country to where Nigerians want it to be.

Jonathan promised to continue his transformation agenda in all sectors, especially agriculture, saying the country must not continue to depend on imported foods.

According to him, 'Nigeria must have a robust economy where our young men will have jobs, our health facilities should work, our institutions should function and our roads should be saved, that is the aspiration of the PDP government. Nigeria with a population of about 167 million people must not depend on imported foods, we will all crash. We must re-engineer the agriculture sector.'

Prior to presenting birthday card and a letter, Baraje had commended the President for instituting the culture of non-interference in party matters as well as promoting the principle of separation of power.

'Our party and indeed most Nigerians are proud of you for introducing the culture of non interference in the activities of party and the affairs of the other arms of government.

'Your amiable transformation agenda raised a lot of hope for the common man in Nigeria. As you achieved 54 years on earth, it is our believe that the older you become, the more you excel. The good people of Nigeria appreciate you'.

Bareja, while fielding questions from State House correspondents shortly after the presentation, insisted the embattled Governor of Bayelsa, Timipre Sylva had been informed why he was not cleared for last Saturday's gubernatorial primary, challenging him to make the reasons public.

Governor Sylva alongside three others were not cleared by the PDP Screening Committee to participate in the November 19, 2011 gubernatorial primary in Bayelsa.

In spite of the motion on notice issued by an Abuja High Court, the PDP went ahead to conduct the primary, which produced Mr. Seriake Dickson as its flag bearer.

Baraje, posited that the party reserved the right to field any candidate to fly its flag at the February, 2012 governorship election in the state.

'All I know is that in accordance with the law, the party has the right to present whoever is convenient to the party and that is what we have done'.

The PDP acting chairman also argued that the party did not flout court order, saying that what they received was a motion on notice and not an injunction.

'We were able to show reasons why we should go ahead. It was not an injunction, it was not an order, it was not anything stopping our party, we are a due process party, if the order had come and say stop, we will stop but that order was not to stop us', he explained.

Asked to comment on the Bayelsa primary, the ruling party chairman after initial hesitation described the primary as very transparent, free and fair.

According to him, 'if I describe it, you will say because am the Acting Chairman of the party. Why don't you ask Bayelsa people, why don't you ask our people in Bayelsa? But if you want my comment, it is one of the elections that is the freest for our members.

'It was covered live by NTA under the glaring eyes of the media. I told the pubic that during this period all the elections we shall be doing will be transparent, will be under the watchful eyes of the media and that was what we did.'

He also ruled out the possibility of the controversy surrounding the primary affecting the party in future, saying 'we have our processes and you must go through such processes before you can go to court.