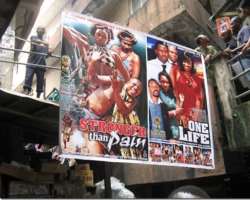 Sometimes I wonder how we can solve the serious rivalry between these two countries when it comes to show business. At a time Nigerians were asking Ghanaians to pay taxes before they allow their moves into their country, most of the Ghanaian movie producers also came to the conclusion that Nigerian movies are not really helping the growth of the Ghanaian market.

So they indirectly stopped the Nigerian movies entering into the country which brought up a strategy to feature Ghanaian actors in their movies to enable them sell here in Ghana.

Just last weekend, there were rumours that TV3, TV Africa and Crystal TV have ignored Ghanaian movies for Nigerian movies which brought unhappiness to many local producers. It turned out to be a radio discussion on many radio stations in Ghana and the managers of the various TV stations made it known that, Ghanaian movies are more expensive than Nigerian movies plus the Nigerian movies have good story lines which suit their audience.

After these discussion, we had a call from Mr Sam Azubuke who is the former Vice President of the Directors Guide of Nigeria and also a member of the Association of Movies Producers in Nigeria complaining that all the statements going round town that the TV stations have be buying the movies cheaper from Nigeria are lies. “Ghanaian TV stations are taking the association of move producers in Nigeria for granted especially Crystal TV which we have been tracking for some months now.

They have been broadcasting our movies and when we consulted them they were not bale to give us reasonable answers. The painful aspect is that the Ghanaian media has been tagging Nigerians as thieves and selling us negatively to the world” he said.

“If you people say that we are thieves and you Ghanaians are angels, why then do you have to steal our movies and also pirate them. The can never do away with our products; we will just use crystal TV as an example. We have been watching you Ghanaians for long and this is the time to set an example, what I want Ghanaians to know is that, we Nigerians are fast and not thieves” he revealed.

Sam who has produced over 30 movies including living in pain, my sister my child which have been broadcasted by crystal TV said that when he consulted Crystal TV, they insulted him so the association of movie producers in Nigeria have logged a complain to their lawyers to sue Crystal TV soon.

Talking to the Director of Crystal TV, Mr Nat Aryee, he made it known to Flex Newspaper that “some people have already been here and they clamed they were members of the Association of movies producers and we thought we have solved everything with them.

So if they still insist they want to take us to court they should go ahead, we are ready for court and war anytime they are ready. Who knows if they are here in the country to defraud us? We are waiting for them therefore we can't say anything more” Mr Aryee revealed.

One producer who also added his voice to this said “we should not forget that we are all one people and one family so we should always do the right thing for the young ones to follow. We have to stop accusing each other as thieves and also to stop the things that will bring misunderstanding between the two countries” he said asking for anonimousity.