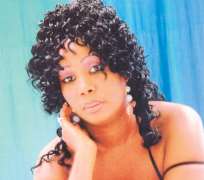 Oby Edozien's dream to quit spinsterhood may soon come to reality, if the story hovering around the pretty actress is anything to go by.

An industry source scooped that the sexy thespian, after many years of loneliness, has warmed herself into a relationship that is said to be altar bound.

The source further squealed to us that the popular role interpreter met the new Romeo months back, and since then the romance has been waxing stronger and stronger.

Not only that, the soft spoken actress, we learnt, has been giving God all the glory for giving her the man that means the world to her.

In a related news, we gathered that the sultry actress multi-million naira mansion nears completion.

According to sources, the house project which actually started few months back, has only scored 60 percent progress.

It would be recall that weeks back,Oby Gold as she prefers to be called added a brand new Porsche Cayenne worth almost 10 million naira to her garage.