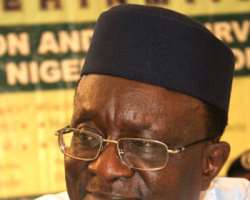 He died in the early hours of this morning at Lister Medical Centre, Ikeja, Lagos where he was receiving treatment for lung cancer. He was aged 71.

Sources in his house confirmed to nollywoodgists.com this morning that the popular human rights activist breathed his last this morning at the hospital.

The late activist, who returned to the country recently from a London hospital where he had been battling lung cancer for the past two years, was celebrated by friends and members of his family during his 71st birthday on 22 April, 2009 at his residence in Ikeja.

Even though he was not present, eminent Nigerians, including the former Chief Justice of Nigeria (CJN), Justice Mohammed Uwais, Justice Bode Rhodes-Vivour of the Court of Appeal, Tayo Oyetibo (SAN), Mike Ozekhome, Wahab Shittu, Oluwole Kehinde and Chairman of the Ikeja branch of the Nigerian Bar Association (NBA), Dave Ajetunmobi, graced the occasion.

From the civil society came former President of the National Union of Petroleum and Natural Gas Workers (NUPENG), Mr. Frank Ovie Kokori, Dr. Joe Okei-Odumakin, leaders of the Oodua Peoples Congress (OPC), Dr. Frederick Faseun and Gani Adams and the leader of the Movement for the Survival of the Ogoni People, Ledum Mitee.

The spiritual head of INRI Evangelical Mission, Primate Babatunde Elijah Ayodele, in his book titled Warnings To The Nations, had predicted that Nigerians should pray against the death of an elder statesman.

“This year 2009, let's pray against the demise of a prominent politician that will pass away. We should also pray for all our elder statesmen, especially in South-South and South-West so that none of them will pass on.

“We also need to pray against sudden death in the judiciary,” Primate said in the book released some months ago.

The late Chief Fawehinmi dominated the legal space like a colossus. Those who ignored him did so at their own peril.

He was Nigeria's foremost human rights activist and lawyer.

He was a philanthropist who put smiles on the faces of indigent students by giving them scholarships.

Forty students benefitted from his scholarship awards on Thursday, 27 February, 2009, when each of them got N100,000 from Chief Fawehinmi to further their education.

As at the time of filing this report, hundreds of mourners had besieged his Ikeja home to commiserate with his family.

With his boundless energy he tenaciously and uncompromisingly pursued his beliefs, principles and ideals for the untrammelled rule of law, undiluted democracy, all embracing and expansive social justice, protection of fundamental human rights and respect for the hopes and aspirations of the masses who are victims of misgovernance in our country.

In 1986, while Chief Fawehinmi was Dele Giwa's lawyer, the latter was killed with a parcel bomb under suspicious circumstances .

As a result of his activities, Chief Fawehinmi was arrested, detained and charged to court several times. His passport was also seized on many occasions. His residence and chambers were searched several times. He was beaten up many times and was imprisoned in various parts of the country to prevent him from being listened to by the masses. His books were confiscated by the Federal Military Government and and his library in Surulere, a suburb of Lagos was set ablaze. Even his chambers at Anthony Village, Lagos State, was attacked and invaded by persons suspected to be agents of the government on 26 August, 1994. The invaders shot his chambers' guards and seriously wounded two of them.

In the course of his crusades for the rule of law, the hopes and aspirations of the poor and the oppressed, he fought many battles against the military dictatorship as a result of which he was arrested several times by the military governments and its security agents. He was dumped in many police cells and detained in several prisons between 1969 and 1996.

His supporters call him “the scourge of irresponsible governments, a thermometer with which the blood pressure of dictators is gauged, the veritable conscience of the nation and the champion of the interest and causes of the masses.”

His promotion to the status of the Senior Advocate of Nigeria was delayed as a way of victimising him. Eventually, he got the award in 2003.

In 2008, Chief Fawehinmi rejected the highest order that can be bestowed on a citizen by the Nigerian government—Order of the Federal Republic (OFR)—to protest misrule since independence.