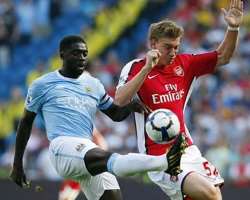 Toure, who resumed playing in September after serving a six-month ban, failed a test after taking a diet pill that was not intended to enhance his performance.

"Following the conclusion of an internal disciplinary process, Manchester City Football Club can confirm that Kolo Toure has received a fine of six weeks' wages which relates to doping offences committed by him earlier this year," City said in a statement.

"Kolo accepts the decision and he and the club now wish to draw a line under this matter and focus on the season ahead."

Since returning from his ban Toure has featured just twice for City, with both appearances coming in the League Cup.