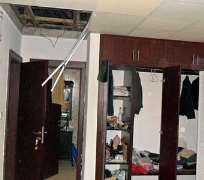 Abuja, Nigeria: On or about 0200 hrs of 5th of November 2011, I was rudely awakened to stare down the barrel of an AK47, menacingly pointed at my head by a gunman while others ransacked the room. The gunmen had disabled the house security systems, tied up the guard and stealthily gained entry into the building using a ladder to access a window, ceiling and roof since the security doors denied them access.

Assuming they were armed robbers, I directed them to a section of the wardrobes that held monies or valuables that might satisfy their evil lust for lucre. Moving quickly through luggage, boxes and safe, all manner of values were emptied with precision and the marauders proceeded to the other rooms in the house. However the gunman guarding me warned that if I thought such cooperative gesture would save my life, then I was sorely mistaken. As I tried to engage him as to what manner of offence I had committed to warrant such a death sentence, he cut me short with a rather curious question; “whetin you get with this government sef”? Before I could fathom an answer, the gunman took some steps back, took aim and pulled the trigger. But the gun appeared jammed (All praise to the Almighty).

As he tried to cock the gun properly, acting almost out of impulse, I immediately jumped him and grabbed the gun in a bid to disarm him. As we struggled for possession of the weapon, his screams alerted the other gunmen who had left the room to ransack other sections of the house and two of them now join the fray to loosen my grip on their partner. Struggling on the floor, I used the jammed gun to complete a neck crank on their cohort and then used him as a shield against any shots from his partners. Screaming instructions in a dialect that I could not understand, the gunmen then used their gun butts to hit my arms and shoulders until I let go of their partner and they all fled the room and house.

In retrospect, the attackers had abandoned their mission early because they were convinced that I was impermeable to bullets and more so, their lookout outside the compound had informed them of the arrival of the police, thus the expediency to escape quickly. Throughout the operation, they communicated through the speakerphone mode of their phones that was left on.

One of the gunmen was however shot dead while exiting the compound by the Asokoro police response team that arrived the scene while others escaped in the confusion of the melee. It must be noted here that the actions of the Asokoro police team has both gallant and commendable.

As I took stock of the incident and damage, some ominous questions lingered.

Was this a failed assassination attempt or robbery? Why was government even an issue in the heat of a supposed “robbery” operation? Was it possible that my criticism of government industrial policies had become an unbearable pain in some official quarters?

Without prejudice to the ongoing investigation by the relevant authorities, I call on President Goodluck Jonathan and the Police Inspector General of -AlhajI Hafiz Ringim, to ensure that the all culprits of this heinous attack are brought to justice.

The first and primary role of government remains the provision of ample security for its citizenry. Failure in this elemental responsibility, clearly indicts government and her agents in the accelerated descent into the anomie and senseless violence that is prevalent in Nigeria today.