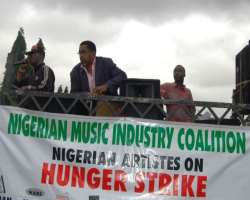 A musician, simply identified as “Yellow King” collapsed on Tuesday in Lagos, during a hunger-strike rally organised by coalition of musicians at the National Theatre, Iganmu, Lagos.

The News Agency of Nigeria (NAN) reports that the musician had participated in the hunger strike and rally initiated by his colleagues to protest activities of pirates in the country.

The rhythm and blues singer was standing among some popular musicians when he suddenly slumped on the grass, while his colleagues made frantic efforts to resuscitate him.

NAN reports that the musician was rushed to nearby Ajayi Memorial Hospital for further treatment as his colleagues quickly raised money to pay his bills.

The President of the Performing Musician Association of Nigeria (PMAN), Chief Dele Abiodun, described the incident as unfortunate.

“It is sad and unfortunate that one of us collapsed during this rally. Yellow King just recovered from serious sickness about two months ago but he insisted that he will participate.

“ This will show how important our members consider this struggle. Piracy is strangulating musicians and other artistes and something must be done urgently to tackle it,'' he said.

Tony Okoroji, a musician and former President of PMAN, said that the ugly development would not deter other musicians to continue with the hunger strike.

“ One of us has just collapsed here now and we are praying that he will not die but that will not stop us.

“ We are going to continue to stay here hungry until somebody is ready to listen to us and offer to fight the cankerworm of piracy,'' Okoroji said.