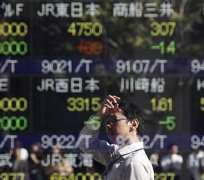 Asian shares fell and the euro hovered near three-week lows against the dollar on Wednesday, as investors shed riskier assets after Greece's abrupt call for a referendum rekindled fears about the viability of a European debt deal reached just last week.

Stocks wiped out all gains made during the huge relief rally last week that followed an announcement that European leaders had agreed a basic framework to help reduce Greece's huge debts, boost the region's bailout fund and strengthen banks.

Amid signs that the European turmoil is having an impact on sentiment as well as actual growth, investor focus was shifting to policy measures from central banks in the hope they will help soothe market jitters.

The U.S. Federal Reserve, which began its two-day policy meeting on Tuesday, could begin to prepare financial markets for further monetary easing, even if it refrains from any new stimulus just yet.

GREEK DRAMA
The Greek government faced possible collapse on Tuesday as ruling party lawmakers demanded Prime Minister George Papandreou resign for throwing the nation's euro membership into jeopardy with a shock call for a referendum on the deal.

The MSCI world equity index fell on Tuesday, with the index also back to pre-rally levels which had pushed it up to its highest in nearly three months.

U.S. stocks tumbled more than 2.5 percent and European shares posted their biggest one-day loss in more than a month on Tuesday.

There was no relief from data showing the pace of growth in U.S. manufacturing slowed last month, though improvement in October new orders suggested the U.S. economy was not headed for a recession.

The flight to safety pushed up government bonds on Tuesday, with German Bund futures jumping to the highest level in nearly a month, while the yield on benchmark 10-year Treasury notes fell to 1.95 percent, the lowest in nearly a month.

The euro was near three-week lows against the dollar, having suffered its biggest two-day fall since May on uncertainty about the euro zone debt deal.

But the single currency may get some respite in the short term as market focus shifts to the Fed's policy meeting. The dollar index was at 77.361, near Tuesday's peak of 77.676.