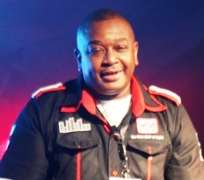 Popular On Air Personality and Programmes Director at Beat FM Olisa Adibua on Monday, October 31, 2011 resumed his work as host of 'The Morning Rush' on Beat FM 99.9 after serving a suspension for assaulting a staff, Adewunmi Oyekanmi.

We gathered that his suspension lasted for about 7 weeks.

You will recall that Olisa was accused- with pictorial evidences – of battering a colleague, Oyekanmi Adewunmi, at their Lagos Office.

Adewunmi, a news Editor at Naija F.M, sister station to Beat F.M and Classic F.M was said to be resting on the office couch, at about 2.00a.m Thursday, September 08 2011 when Olisa walked in and battered him.

The offence was that Adewunmi had the effrontery to sleep on the office couch!

Olisa was said to have hit him severally with objects at his disposal, tore his clothes to shreds, smashed his phone and threw him out of the office complex.