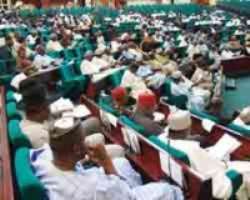 Ex-Reps form coalition against govt's bid, graft
FIRS denies opposing move
THE planned removal of subsidy from petroleum products and the setting up of the Sovereign Wealth Fund (SWF) by the Federal Government have continued to overheat the polity.

At private and public fora during the weekend and yesterday, the twin-issue took the front burner and sadly enough, there was no consensus among the actors on the controversial policies.

Even the Christian Association of Nigeria (CAN) known for taking a common position on such national matters, for the first time in a long period, is divided on the measure.

The same goes for serving and former members of the National Assembly. While some incumbent members of the federal legislature gave qualified support for the policies, their colleagues outside the two chambers, have formed a coalition to mobilise Nigerians against the withdrawal of fuel subsidy and corruption in the polity.

After a two-day emergency meeting in Kaduna at the weekend, Christian elders in the North, dissociated themselves from the alleged support of the CAN leadership for the government's plan to stop subsidising fuel for Nigerians.

At its session yesterday, the Senate summoned the Nigerian National Petroleum Corporation (NNPC), the Nigerian Navy (NN) and Nigeria Customs Service (NCS) to get more explanations from them on the subsidy palaver.

Senators during the proceedings also sang discordant tunes on the renewed agitations in certain quarters for the creation of more states in the country.

The Senate, following a motion sponsored by Dr. Bukola Saraki (Kwara Central), mandated its committees on Petroleum, Appropriation and Finance to investigate how much Nigeria had spent on fuel subsidy with a view to taking a position on whether the policy should be cancelled or sustained.

Addressing journalists in the National Assembly yesterday, the chairman of the joint committee, Magnus Abbe, said the panel had prepared a module for the exercise beginning with a meeting with some key agencies of government to get vital information from them before the forthcoming public hearing on the matter.

'The effect of that assignment is for us to conduct a full investigation into the issue of fuel subsidy in Nigeria, following a motion brought by Saraki and an amendment to the prayer by the Senate Leader, Victor Ndoma-Egba (SAN).

He said the members would meet with the government's agencies involved in the oil subsidy to get a clear brief from them on the origin, nature, history and everything official about the operation of the oil subsidy in the country.

The committee would also invite memoranda from interested members of the public to contribute to the topical issue that affects all Nigerians.

Ndoma-Egba said the invitation to the government officials stated clearly that the committee had resolved to request their reactions in a written brief on the entire procedure for administering the subsidy, sources of the funds and why there had been unprecedented rise in the quantum of subsidy in the later part than at the beginning of the year.

The panel chief assured Nigerians that the process would be transparent and 'whatever is the collective wisdom of the members of the committee, at the end of the exercise would be made available to the Senate to take a decision and also for Nigerians to see what we have done.''

On why multinational agencies were not invited, he said: 'This invitation is not for public hearing; it is for the government agencies to brief us. For a lot of us, this terrain of subsidy, we don't understand it any more than you do. We need to get the basic foundation from those that are running the scheme, and that is why we are inviting them.'

A few days after the Senate mandated a committee to investigate the issue of paucity of funds among the states and advise it on the way out at the instance of a motion moved by Olu Adetunbi (Ekiti North) that only few states were viable, which made some senators to canvass the merging of the weak ones, Ayogu Eze has risen against the move.

He said yesterday that he would mobilise his colleagues on the matter to create more states arguing that the problem was not that the states were not viable but 'they have not been able to tap the resources that abound.'

In a statement issued yesterday by the Co-ordinator of the Concerned Northern Christian Elders, Mr. Yahuda Peter Marsa, the group said: 'Most disturbing to us is the much publicised endorsement of the Federal Government's action by the leadership of CAN as was relayed by its National President, Pastor Ayo Oritsejafor.'

Marsa said the group's meeting was not borne out of any political, geographical or religious sentiments; rather it was conceived purely on national and common good and towards the betterment and welfare of all Nigerians irrespective of creed.

He explained that, 'after some critical assessment, consultations and analyses from economic experts, we resolved that the removal of fuel subsidy is ill timed and insensitive because it is an outright addition to the sufferings of the Nigerians wherever they are and no matter their religion.'

The group claimed that CAN national leadership did not act in consonance with the reality of the situation in Nigeria through its hasty endorsement of the government's action, pointing out that 'from their disposition and body language, the CAN president is using the umbrella body of the Christians in charting a different aspiration from what we used to know of the organisation.'

Marsa appealed to Oritsejafor to study the stewardship of all his predecessors, from Cardinals Ekandem and Okogie, to Primates Akinola and Mbang and recently Archbishop Onaiyekan and learn from their temperate leadership of CAN.

'We may support President Goodluck Jonathan as a Christian, and bear some of his challenges, but on this issue he is wrong and going astray and desperately in need of redemption. For the CAN president, Pastor Ayo Oritsejafor, we wish to draw his attention that posterity is a strong scale in measuring all the actions of mortals and the rest of us, including him, are not free from it.'

Saraki, Domingo Obende and a member of the House of Representatives, Peter Akpatason, who gave qualified support to SWF and the removal of subsidy, described the two policies as desirable but cautioned against their hasty implementation.

They also advised the government to adhere to due process and avoid any forms of confrontation with the opponents of the measures.

Saraki, who is the immediate governor of Kwara State, told journalists at the Presidential Wing of the Murtala Muhammed Airport, Lagos yesterday that the fact that President Jonathan did not follow constitutional provision in setting up the SWF does not make it unpopular and unacceptable.

To get the support of some governors, who are opposed to the fund, Saraki urged Jonathan to 'do the right thing.'

Obende and Akpatason asked the government to first reach an agreement with organised Labour on the removal of fuel subsidy if it hoped to make headway on the issue.

They said anything to the contrary would put the government on a collision course with Nigerian workers.

Saraki stated that the controversy trailing the SWF arose from the constitutional interpretation of the issue, adding that most Nigerians and their leaders support the idea.

He said: 'I think it is a matter of constitutional interpretation. I do not think most people are against the SWF, it all depends on the way the SWF is being implemented, in terms of the modalities. I think the SWF is good, no amount is too small; it will take time to build it up, every year some money would accrue to the country.'

Obembe and Akpatason from Akoko-Edo Local Council of Edo State made their stance on fuel subsidy public at the weekend during a reception organised for them and other elected as well as appointed politicians from the council by the Etuno Youth Association (EYA) in Lagos.

Meanwhile, former members of the Lower House, Dino Melaye, Independence Ogunewe and others that belonged to the Progressive Group during the sixth National Assembly, have formed the Anti-Corruption League.

Melaye told a press conference in Abuja yesterday that the group would investigate and fight corruption from the wards to the highest political office of the President.

He asked Jonathan not to go ahead with the subsidy removal.

According to Melaye, 'power belongs to the people and the people have said 'No' to the oil subsidy removal.

'We will mobilise the Nigerian youths against the government through massive protests that will force the government to reverse itself if the subsidy on petroleum products is removed.'

On the formation of the anti-corruption NGO, he said that the sole aim was to champion the cause of good governance and join forces with the statutory bodies such as the Economic and Financial Crimes Commission (EFCC), Independent Corrupt Practices and Other Related Offences Commission (ICPC) and the Code of Conduct Bureau (CCB) to wage a relentless war against corruption in the country.

The Federal Inland Revenue Service (FIRS) has denied media reports that it was opposed to the plan by the Federal Government to remove subsidy on petroleum products.

Although the World Bank and the European Union (EU) have endorsed the move, most Nigerians, especially organised Labour, have kicked against it, demanding that certain initiatives be implemented before the introduction of the economic agenda.

Yesterday, the media was awash with the reports that FIRS Executive Chairman, Mrs. Ifueko Omogui-Okauru, reportedly spoke against the subsidy removal plan at the National Assembly where revenue generating agencies went to present the 2012 budget to the Appropriation Committee of the House of Representatives at the weekend in Abuja.

But in a statement yesterday, the agency's Director of Corporate Communications, Mr. Emmanuel Obeta, denied the allegation, submitting that his boss was nowhere near Abuja on the particular day as she was attending to other official duties outside the Federal Capital Territory (FCT).

While calling on the public to disregard the insinuation, Obeta said the FIRS fully supports the subsidy removal plan.