WHY I COULDN'T DATE GENEVIEVE - D'BANJ 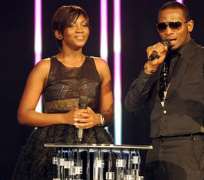 By Charles Mgbolu
Dapo Daniel Oyebanjo aka D'banj is at the peak of his career and unlike other artists who begin a gradual fade on attaining this point, D'banj has proven without doubt that he is just beginning.

Like the extremely talented artist that he is, his songs have been able to completely transform his financial destiny for good.

However, like every true romantic tale, Dbanj still searches for the love of his life. In march last year, he was enshrouded in the biggest mystery ever to rock the Nigerian entertainment industry. The story began with the rumour that the Fall in love crooner was dating Nollywood superstar Genevieve Nnaji and gossip tabloids had fed on it like flame.

The alleged relationship had in a matter of weeks moved from rumour to 'reality' when the Fall in love video was released in May and both 'love birds' were involved heavily in the video to the extent of sharing white hot kisses.

And as if that wasn't enough, Dbanj was reported to have granted an interview to a publication (not Vanguard) where he allegedly confirmed his involvement with Genevieve.

We can however authoritatively tell you that all that was a lie. We can also confirm that both stars may have considered dating.

Dbanj told us in a interview that  'I think Genevieve is a stunner and I could date or love her. But we didn't date. She's my friend and a star you know. We're close and we both understand that things couldn't work out.'

Well that's it and hopefully, this should silence rumour mongers once and for all.

He went on to shed more light on the controversial video saying ' I really can't remember, but that fall in love video cost between N4m to N5m. I 'm not too sure. But I think it's a beautiful idea if not for the way everyone is trying to go about it.

We had options of whom to use in the video, but at the end of the day, we saw that it's an African song and by that time I had already played it in about fifty weddings.'

That song was recorded two years before the video was released and it remains my biggest song ever. I wanted to make a statement with it.'

He made more than a statement with the song. After the release of it's video in May, he was chased across the streets by reporters. His manager and the entire Mo'Hit's crew also ran for cover.

His aged parents were not spared too as reporters  forced them to grant interviews stating they do not know of any such relationship between Genevieve and their son.

It was so much that at some point both Dbanj and Genevieve were rumoured to have left the country to avoid the rather embarrassing confrontations.