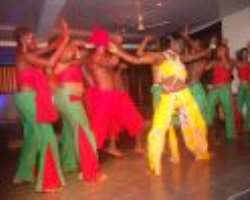 The Black Image Productions, a foremost theatre company with a lot of pedigree, professionalism and integrity is back again with its Celebrity Theatre Initiative (CTI) project meant to showcase the best of stage production in Nigeria. At the popular Kingsize Place in Oregun gathered the industry bigwigs, children, youths and stakeholders, all in the bid to see a live performance of a stage play titled “Beauty from the Beach” the Saga of Abiku, interpreted by the popular showbiz presenter, Derenle Edun, renowned song mistress, Stella Monye, and vivaciously looking Nkan Eledua etc The essence is to bring back life into the stage and add colour to the production.

The play written and produced by Tompson Tabi and directed by Paul O.J Uwagbai carries with itself a truly traditional plot and setting which revealed the conflict embedded with cultural belief of Abiku and possibility of a life after. Abiku question has on several occasion raise dust in our society, most especially amidst the Yoruba people which the play succinctly depicted.

The stage was opened by the fast rising compere Helen Paul, the comedian with a baby voice, suffix to say that she has over the time created a niche of a cliché for herself. She introduced artistes one after the other for performances to wet the audience appetite. On hand were Evangelist Ope Orobiyi and her Eledua voices, followed by Pablo, the Monkeys and lastly, the sensational rave of the moment in R n B music, J-Pryce. The Iwo Nikan crooner, performed to the delight of the audience, reaching out to them and getting them into the rhythm and tempo of the night.

Malomo a beautiful damsel as role-played by Nkan Eledua, an inestimable jewel to the village man called Ojekunle played out a sensational and engaging lead role in the play. The character of Anathakar( whatever that means), Malomo's heaven husband was depicted by the showbiz presenter, Denrele Edun, while Stella Monye was Malomo's mother in the Yoruba setting piece.

The characters were at their very best, Malomo was at her usual best with impeccable delivery and acting. Denrele many felt the character he represented was close to his usual crazy presenting role, however, he got into the character very well, deliverying his dialogue with exactitude and confidence, “Anathakar “ he kept shouting all through the play. Stella Monye was not bad also, though her role in the play was that of a supporting one compared to the others I earlier mentioned. One will not hurriedly forget her vocabulary “ My daughter, don't crying o” portraying an illiterate mother of Malomo. In all the Black Image cast gave a very good account of themselves collectively and individually.

Eventually, the piece graduated gradually to the climax where Malomo was saved from the intermittent sexual and spiritual harassment orchestrated by Anathakar and his heavenly spirit by the herbalist called Fakunle.

The Producer of the Play, Mr. Ola Tompson Tabi averred that “Black Image's Celebrity Theatre Initiative is conceived to further strengthen the strategic campaign to bring back life into the Stage and add colour to our concept through the instrumentality of assembling celebrities of different fields beyond known actors and actresses to perform and interpret roles. This in no measure has added value and unique content to Stage Production and Entertainment Industry as whole in the country”.

All seem set for a continuous exhilarating time as the Black Image Productions has perfected grounds to continue to have a monthly stage play at the Kingsize Place in Oregun. The next one will be to celebrate Nigeria first Nobel Laureate, Prof. Wole Soyinka as he turn 75 years, as they will be staging Soyinka's Lion and The Jewel to the delight of stage play lovers come Sunday August 9, 2009. Sensational actress, Bukky Wright, Fuji Crooner, Alabi Pasuma are amongst others that are billed to perform live on stage!Details will be given later.

Equally, as part of effort to further reincarnate more of the best of actors and actresses in Nigeria, The Street University Project (TSUP) on Sunday 26, July, 2009 had a grading test in form of graduation for nine of its students into the Black Image Productions. The students, who have been under the tutelage of the Black Image Productions in the last seven months were taught dancing, acting, singing and other stage craft. The graduating students thrilled the audience with a lot of mesmerizing skills and dancing steps they have been taught and they are indeed rearing to go on stage professionally.

The event was spiced up by series of activities which had testimonies from the parents and siblings of the students and a thought-provoking lecture delivered by Alayande Stephen T. (Media Manager, ZMC) on the topic “ Youth, Theatre and the Future”. The graduating students are Kayode Olumide, Rufus Oluwaseun Nathaniel, Orogore Chris, Dorcas Anjola, Sosan Obioma, Oyewunmi Segun, Oroktvu Emmanuel and Williams Mosunmola.

Miss Helen Sosu, the TSUP Founder said that “ at TSUP our goal is to train young talented Nigerians to become who they want to be in life in terms of creativity. The target are students within the age bracket of 11-25, who are out there on the street, wandering and this is to lend a hand in getting them accomplish their dreams. Apart from acting, we collaborate with other organisations to give these students a life-line e.g art craft, carving, computer basics, photography etc.” the lanky beautiful CEO who herself is a product of Black Image submit.