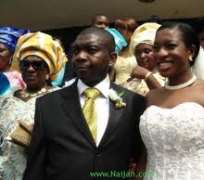 That top actress,Chika Ike and her husband are having problems with their marriage is no longer news to those close to them.Tony Ebireri,the erstwhile hubby of Chika,has moved on with his life after his 5-year marriage collapsed.

Tony,the Sapele,Delta State-born corporate boy has put the marital crisis behind and has now decided to go into politics in his country home.

The Big Boy,who has wined and dined with the high and mighty in Nigeria is now gunning for the Chairmanship of Sapele Local Government Council on the platform of Democratic Peoples Party(DPP),the party on which Chief Great Ogboru emerged as the gubernatorial candidate in Delta State during the 2007 and April 2011 elections.

The ex-UBA management top staff,who believes his chances are quite bright in Delta State politics,has been holding series of meetings with party faithful,women leaders,royal fathers,market women and Niger Delta Youths,all in a bid to enhance his chances in the forthcoming Local Government Council elections in the state.

Having worked in different capacities in corporate Nigeria,Tony believes he has a lot to give back to his people as he insists he knows the problems of the community being a grassroots politician.

The UNIBEN graduate says he is the right man to take Sapele Local Government into greater height.