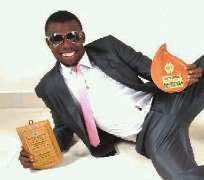 Popular comedian, Emeka Smith, tells 'NONYE BEN-NWANKWO about how he shot to stardom.

You won an award recently…

How did your comedy come about?

It wasn't as if you set out to be a comedian?

I would say it was by chance because I didn't plan to be a comedian. I was already going for auditions to be an actor. But I had a comedy group. In fact, we weren't even doing stand-up comedy, we were acting. But before any stage performance, I would go up to introduce my group. During the introduction of the group, I would crack a few jokes to make sure the crowd accepted us and make them understand what they were about to watch. It was more like an master of ceremonies thing. But I noticed that people were liking it more as I was introducing the group than when I acted with the group. People were telling me I was a funny guy. It got to a point I started getting invitation from other churches to come and do jokes. I didn't even know it was business.

When did you come to know it was business?

It wasn't until when my group organised a comedy show in my church in Surulere. We invited a few popular comedians then, including Sheddi Baba, Jedi, Dauda. We collected a N100 gate fee from people. Everywhere was filled up. Before Jedi went on stage, I went up and introduced him. I invited my friend, Seyi Law on stage too.

Oh, so Seyi Law is your friend?

Oh yes. He was rolling with me in the hood. I was carrying him along. I met him on the streets and we became friends. I invited him on stage then too. He was Seyi Easy and I was MC Dodgy then. My group didn't even want Seyi to perform that day. But I insisted and he climbed the stage and had a great performance. Then Jedi came on stage and said there were two guys in the hall that needed to be exposed. Everybody was asking who the people were. He said Seyi and I should come up. That was how it started.

Yes. He called us after the show and told us that we did great. But he told us we shouldn't stay in Surulere. He said there was no way we would grow being confined in the area. He said we needed to go out more and meet people. We told him we didn't know anybody. He told us he would do something about it.

How did you change your name?

It was Jedi that changed our names. People didn't really know about this. We hardly talk about this. Jedi did it. If not for him, I for dey bear MC Dodgy. See as the name sound sef! He made us understand that names matter a lot. I was even saying I wasn't going to change my name. I told him I was very popular with my MC Dodgy. He told me that if I needed to make money, I ought to change my name. He held my hands and prayed. He said the Lord had given him two names and that I should choose from St. Emeka and Emeka Smith. Immediately he said St. Emeka, I thought of an actor, St. Obi. I said, 'Lai lai.' St. Emeka ke? No way! As for Emeka Smith, I thought of an American actor, Will Smith. It sounded better. And so, I chose Emeka Smith.

Did you make money after you changed your name?

It was incredible! Just as I changed the name, my market value changed. Even people who hadn't seen me gave me jobs on the phone. I don't think it would have been so if I was answering MC Dodgy. That was when I realised that you don't know it all. You learn along the way. Since then, our names are gradually becoming brands.

When did the big break come?

The break came when Jedi introduced us to AY. AY told us he had a competition for people like us. We thought he was joking since we knew him as a comedian. Can you imagine a comedian doing a comedy competition? But when he did the competition, he called us to apply. Seyi and I had just one phone we were using. Anytime a call entered, we asked which of us the call was meant for. Anyway, AY called and told us about the competition. He said the form was N1,000. We told our friends then, but all of them refused to be a part of it. They said they didn't understand this competition a comedian was packaging. They underrated it and kept abusing us.

So you guys went?

Yes, we did. We looked for the money to enter the competition but we didn't see. We went to AY and told him that we have looked for the money but we didn't see it. He laughed and gave us the forms for free. The first competition, Seyi won and I came second. AY encouraged me to go in for the next competition the following month. He still gave me the form for free, but I came second again. He tried to encourage me again and told me I should have hope. He gave me another form the following month and I still came second. I told him this was not my calling. I told him I wasn't doing again.

What made you change your mind the fourth time?

The late comedian, Abagana, who saw my facial reaction at the third time I contested, came to me and told me that I was very good. He told me not to give up. I told him I didn't know where I was going to get money to buy the form again. He said I shouldn't worry. He was the one that bought the form for me. I finally won the fourth time. AY was planning a bigger show. I was part of the people that was sharing fliers. But after winning the competition, Diamond Bank, the sponsors of the competition then, started inviting us for their end of year events. A bigger comedian would anchor the end of year party, while people like us will come and do comedy at the side. That was how things started changing. Lagbaja invited me to perform at Motherlan'. Basketmouth was there. He too invited me to come and perform at his show. And that was it. I did shows for four months back to back. I started performing at the major comedy shows in Nigeria and people started knowing me.

What happened to the acting ambition?

It is dead; it died back then. I moved away from it. I might go into Nollywood. I was with some producers in America and they picked interest in me.

Na God. Things don change o. I have been to Ghana, I have been to Kenya and I have been to the US. All this happened through comedy and I thank God. I just came back from the US. I was invited as a special guest for the Nigerian Entertainment Awards in New York. I had a great performance. It was crazy.

Did you think you would get this big?

At all; I never thought so. I started imagining it would be big when I started handling N30,000 and N40,000 just for cracking jokes for 10 minutes. It was like blood money to me. I thought I was into rituals. But I have realised that comedy has done so much for me. I trained four of my young siblings through the university with the money I made as a comedian. Now, I'm back in school with comedy money. I take care of my family with comedy money.

We heard you performed for the President recently.

Yes. The President's Chief Security Officer's wife had a set of triplets and the President organised a reception for him. I was one of the people that performed. Ali Baba was the MC. It was a lovely event. I could see the President was pleased with the performance.

For somebody who didn't have N1,000 to buy a form, how did you feel when you made your first big money?

The first big money I handled was the N50,000 I won at the AY competition. I couldn't go home. It was an all night event. When they gave me the money in the morning, my friends and I stood at the junction and we started crying. I couldn't believe it. I was asking myself what I was going to do with such a huge sum of money. Can you imagine? Fifty thousand naira? Just for cracking jokes? It was unbelievable. I couldn't tell my mum I won such money. She for think say I thief am. But thank God it has changed.

Why did you have to train your siblings in school before yourself?

I'm form Delta State. I tried to get an admission in Lagos universities but it didn't work out. My younger ones went to school in my state. I got advice from people like AY when I started becoming popular a little bit. I got an admission and I told them I was going to the University of Benin to start school. They told me that if I should leave Lagos, my name would just die. They gave me instances of some comedians who left Lagos to go to school and couldn't rise up again thereafter. I finally got admission to the University of Lagos.

How was life when you were growing up?

It was difficult. I was not born with a silver spoon. I left home in 1998. I didn't finish my SSCE at my parents' house. From JSS 1 to SS 1 was very tough. They didn't have money. I was in a public school. I trekked from the house to school every day and it was a long distance. Of course, there was no money to buy anything during the break period. Others go dey eat, you go dey look them. I didn't want to stress my parents because I knew they didn't have. I had to leave and struggled till I finished.

Have you ever been embarrassed on the stage before?

Why don't you do vulgar jokes?

People know me for the kind of jokes I crack. I'm known as a gospel comedian. I've done events for Daddy GO of the Redeemed Christian Church of God. Most of my clients before were even people from the church. I don't do raw jokes even when I'm in a secular show.

What else do you do aside from comedy?

I sell cars. I import cars and I sell to friends here. I plan to make it bigger.

We learnt you had a steady girlfriend…

I have a fiancée, but she is in America. I might relocate.

Did you meet her when you just travelled?

Ah! I no fit waste time o. I met her in New York. Sharp sharp! I'm not marrying her because she stays in the US. We clicked. I was with her for close to three weeks. It wasn't as if I met her today and proposed to her the next day. She is a Nigerian.

When you are coming up and you are good, you are everywhere. So many people want you. And then, the demand to create fresh jokes comes in; it is not easy. You go from one show to another and you will not have time to create jokes. It is a challenge. But I always ready. I'm observant. I've close to five boys in my house. Something will always come up. I've to be alert as a comedian. I try to make humour out of everything I see. It's not easy anyway.