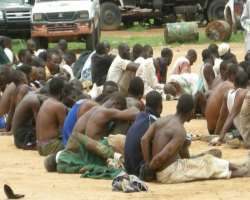 Suspects arrested by the Bauchi Police following a raid on their hideout. Photo: NAN
Listen to article

The group, demanding for the adoption of the Islamic sharia law, attacked and burnt a police station in Potiskum in Yobe, on Monday according to the police. Bauchi, Yobe and Borno States are among the 12 of Nigeria's 36 states that started a strict enforcement of sharia in 2000.

Spokesman of the Yobe Police Command, Mohammed Paddah said that that two persons were killed during the attack that occurred at about 2 a.m.

Mr. Paddah, who did not disclose the identities of those killed, said that the police were still investigating the details of the attack and that efforts would be made to repel such attacks in future.

In neighbouring Borno State, a group, believed to be Boko Haram, attacked a police station in the state's capital, Maiduguri. It was not clear if there were any casualties.

Reports are claiming that some Islamic militants had attacked and burnt a police station, and had killed 39 people in Bauchi, on Sunday.