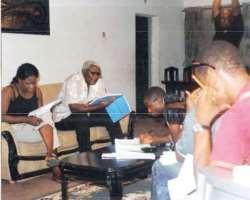 The frustration on Onyeka Madu's face was clearly visible as he drained his last glass of beer. Two years after leaving the university, his hope of becoming a movie actor is still what it has always been - hope. He has not starred in a movie, though he's been getting promises of one role or the other.

"When I moved to Lagos a couple of years ago, after my graduation; they told me if I want to get into the movies, I should come here," said Mr. Madu, a graduate of Mass Communication from the Enugu State University of Technology.

The 'here' Mr. Madu was referring to is Winis Guest House, a three-storey building standing beside a Celestial Church of Christ building at Folawiyo Bankole Street in Surulere, Lagos.

Just over a decade ago, the guest house was the hub of activities for actors, actresses, directors, and anybody calling the shots in the movie industry.

"Those days, this place served as the gathering place for all the actors and actresses in Nollywood," said Sunny Onwordi, an assistant movie director.

On how it all began at Winis, Mr. Onwordi said before the advent of Winis, ECOWAS Hotel on Agbonyi Street in Aguda, Surulere, used to be the popular hangout for actors.

"Around the mid-90's, we were hanging out at Winis. Later we moved to ECOWAS. When ECOWAS was closed down for unknown reasons, we came back to Winis," said Mr. Onwordi.

Mr. Onwordi said Winis has always been accommodating to artistes, and being situated at Surulere which, according to him, is the heart of entertainment, it became a meeting point for the artistes in the movie industry.

The guest house served, mostly, as lodging as well as a converging point for the Nollywood artistes. As a result, those already in the industry and aspiring artists started getting accommodation and offices around Winis, or at least, within Surulere.

"Winis always gave us subsidies when we lodge. And even when some artistes couldn't pay up, they were always understanding," said Patrick Chukwuedo, a production manager.

A recent visit to Folawiyo Bankole Street showed some actors, actresses, and technical hands in the movie industry, hanging out around the guest house.

Restaurants within the vicinity served as relaxation joints and converging points.

A lady operating one of the numerous relaxation spots along the street, who didn't want her name disclosed, said artistes hanging out in the area has been good for her business. "I was operating a hair salon before but when I noticed that joints are better, I quickly switched. So far, it has been a wise business move," she said.

"Artistes love to relax, and this place has been most conducive for that," Mr. Chukwuedo said.

The plan to move artistes to an artistes' village at the National Theatre, Iganmu in 2000 was unsuccessful.

Mr. Onwordi said the move became imperative because they felt artistes were no longer respected, especially by the residents in the area. He said artistes often engaged in scuffles with the residents and area boys.

"The move was a monumental mistake. They moved only the Actors' Guild of Nigeria (AGN) but the other guilds in the industry were not moved. So Winis was still serving as their meeting point," said Mr. Chukwuedo.

He said that after a brief stay at Iganmu, everybody trooped back to Surulere.

However, with the establishment of the Actors Guild in all the states and the shooting of movies away from Lagos, the usual throng of artistes to Folawiyo Bankole Street has been on a steady decline.

Now, according to Mr. Chukwuedo, most of the artistes also hang out at O'Jez, another popular hangout for artistes, inside the National Stadium, Surulere.

"Asaba and Owerri are the happening places right now, in terms of movie locations. And the trend now is to call the stars you want to use to sell your movie, and then you can arrange for the other members of cast and crew. Gone are the days you pack actors from Lagos to a location," Mr. Onwordi said.

Situating the Actors Guild at 14, Nnobi Street in Surulere, less than 500 metres from Folawiyo Bankole Street, meant Winis was still relevant to the artistes.

"When we had no office, we used to gather at Winis whenever we wanted to hold a meeting. But now we are more organized, and we have an office," said Chikezie Uwazie, an actor and the financial secretary of the Lagos State chapter of the AGN. He said though artistes still go to Winis, "basically, we do everything in our office."

At the moment, Mr. Madu is contemplating relocating to his native Enugu State.

"I don't want to waste my life here. I would stay a little longer and if nothing happens, I would go back to Enugu," he said.