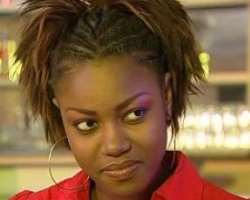 Vyone Nelson is one of the gals in Ghana's entertainment scene that is known and respected in Nigeria's Nollywood. Recently, the actress who was said to have come for a shooting in Ikoyi, Lagos engaged in a show of shame as she fought a Naija actress over trivial issues.

The issue which some later attributed to be husband snatching saga was later put to rest by co actors on location. More to come.