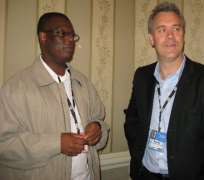 Mr. Afolabi who also studied film in the San Francisco Art Institute U.S.A in his opening remark earlier on Monday had stated that since the debut of the Workshop 817 practitioners had benefitted from the programme through the tutelage of world-class professionals.

The director who spoke to burningpot revealed that the SHOOT Workshop, a training and capacity building programme made its debut in 2005 and that since then it has continually faced the challenge of transiting from Cine to Video as a format of production.

At this year's SHOOT, Mr. Afolabi said that practitioners through the array of world-class resource persons would engage in lively discussions, discover and learn practical skills for getting more out of new and existing content creation tools and applications as well as get advice on how to keep their business moving forward.

The five day event for this year which has as its theme 'Reel Life, Real Sound” has participants drawn from the very best and upcoming in the industry.

As it enters day three already as usual it has been able to stand its own as a permanent feature in the calendar of film in the country.

Facilitators are drawn from various segment of the film industry.

Alric Wilson, a graduate of music from Reohampton University, London school of music and media. ALRIC has played , wrote and compose music for various artist, based in London. His specialty is composing for film and television. He is handling music for film.

Penny Tweedie a renowned award winning and word class photographer takes charge of the photography class. She is based in the UK. She has had assignment in 80 countries covering varieties of issues and personality, writers, artist, musicians, politicians and scientist. Her magazine assignment includes Time, Newsweek, Observer, independent, The Sunday times, Paris Match etc

Stephen Bayly teaches participants on how to use Meisners techniques to work with actors.

Stephen has taught as guest lecturer at Harvard, Penn and York universities. He also undertakes consultancy work for screen south film Cornwall and recently for the Maltese government re training and education programs to help build the Maltese film industry. Stephen Is a member of bafta and the European film academy, he is also an adviser to the screen academy Wales.

Sylvie Bringas a producer director who is also involve in animation education lectures at Westminster University and the Royal College of Arts London. The software developer, has also worked as a professional for more then 20yearsin the audio visual industry.

Dominique Giral a graduate of electronic engineering is also a technical consultant for application linked to time management in broadcast area.

These team of professionals has converged at the National Film Institute Jos Nigeria to impact the modern way of film making to itrested film and aspiring film makers in Nigeria.