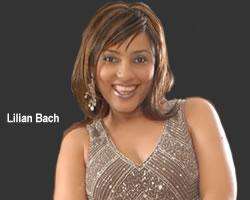 Nobody needs a crystal ball to predict or foresee that screen diva Lillian Bach is in love. The way this mulatto babe snuggled close to her heartthrob, Davidson Johnson, is making some people green with envy.

Lillian hardly removed her eyes from her man, even when she was called to the high table in one social event. While the national anthem was going on, the beautiful babe, in her designer eyeglasses, gazed at Davidson who tried to keep a straight face.
At a point, through non-verbal communication, Davidson, who wore a light brown stripe suit, went out. Soon after, Bach followed him.

Davidson later resurfaced alone and sat tight to his seat even during the dancing time. He later left alone in his black car.