SPEECH DELIVERED BY HIS EXCELLENCY, PRESIDENT GOODLUCK EBELE JONATHAN,GCFR, AT THE SWEARING-IN CEREMONY OF THE CHIEF JUSTICE OF NIGERIA, HON. JUSTICE DAHIRU MUSDAPHER, CFR ON MONDAY, 26TH SEPTEMBER 2011 AT THE STATE HOUSE, ABUJA. 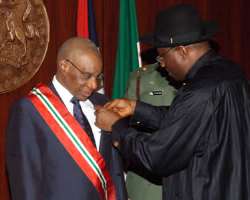 PROTOCOLS
1. Today marks another special moment in the history of the Nigerian Judiciary as we have just witnessed the swearing-in of Hon. Justice Dahiru Musdapher as the 12th Chief Justice of Nigeria.

2. Hon. Justice Dahiru Musdapher has a very rich and impressive legal background which eminently qualifies him for this appointment. The hallowed office of the Hon. Chief Justice of Nigeria carries with it onerous obligations. It requires the occupant of such an office to possess certain qualities: hardwork, perseverance, ingenuity, a robust intellect and integrity.

3. Your Lordship, it is the expectation of the general public that as you assume office, the judiciary will remain totally committed to the cause of justice.

4. It is equally expected that your Lordship will at all times, particularly in the course of your service as the head of our nation’s judiciary protect and uphold the rule of law, respect and observe due process, exhibit great character and learning in the discharge of this sacred responsibility which God has placed on your shoulders.

And more importantly, inspire the confidence of the general public in the Administration of Justice.

5. It is my hope that your Lordship will steer the ship of the Nigerian Judiciary to the best of your ability at this moment when our dear nation and the Judiciary especially, is faced with daunting challenges. There is no doubt about the need to embark on comprehensive reforms in the Judiciary to enhance capacity, efficiency, and productivity as well as the perception and confidence of the general public in the ability of the judiciary to dispense justice.

6. The judiciary has a sacred duty to help ensure stability within the polity through the promotion of the rule of law, strict guardianship of the Constitution, and constant and unfailing application of the principles of justice.

7. To my mind, a vibrant judiciary, fulfilling its essence as the Third Estate of the Realm, acts as a restraining influence on the likely excesses of the Executive. It also provides a signal to all men that while their rights would be protected under the law, no form of impunity or wanton recklessness will be tolerated under the same laws. The fundamental value of the judiciary thus lies in the manner in which it builds a tradition of respect for the law.

8. Your Lordship, the most urgent task, with regard to the judiciary at this time, is to protect and ensure the sustenance of that tradition of respect for the law.

9. My Lords, distinguished Ladies and gentlemen, our judiciary has had quite an eventful history in contemporary times: from the era of military rule when its officers had to walk the tightrope between the enforcement of constitutional principles and the challenge of managing a military that combined both executive and legislative authority, to recent years when the separation of powers is well defined under a democratic framework. Political questions are now increasingly being resolved by the courts, a general awareness of the place of the courts as the last hope of the common man seems to be on the rise. This is an encouraging development.

10. In many ways, the judiciary is proving to be a pillar of our Constitutional democracy; its potentials and value are well advertised. But it is also, I must say, a judiciary that is faced with a lot of problems; in its relative success lies many unanswered questions, challenges and opportunities for fresh learning and reform.

11. The wheel of justice, for example, still grinds rather slowly although many laudable efforts have been made to correct this. There are questions also about the quality and efficiency of the administration of justice with regard to procedures. This year, I had signed the Evidence Act and the Legal Aid (Amendment) Act as an indication of our preparedness to support all efforts to enhance the dispensation of justice. We are prepared to continue to collaborate with the judiciary and the legislature to do everything possible to upgrade the performance of the judiciary as an institution.

12. However, a much bigger challenge is to be traced to Your Lordship’s reference at a recent public occasion to the widespread perception of a growing crisis of integrity within the judiciary.This is something that should be carefully addressed.

13. The reputation of judges, the public perception of their commitment and integrity, is central to the efficacy of the courts to uphold the law and dispense justice. Judges are expected to be impartial, independent-minded and fair to all concerned. A partisan judge compromises his or her oath of office and acts unfairly. A corrupt judge disgraces the Bench on which he or she sits and the title that he wears. Judges should have power, and they do, but just as the Executive and the Legislature must not abuse their powers, judges are also expected to be above board.

14. Your main task therefore should be to further enhance the dignity of the courts, for on that foundation rests the integrity of our Constitutional Democracy. Every one of us must wake up every morning, confident that the judges of Nigeria will always protect our freedoms.

15. My expectation is that all judges whatever be their title or rank will cooperate with the Chief Justice of Nigeria to make his tenure successful. In-fighting, personality clashes, and needless acrimony within the judiciary can only serve the unwanted purpose of bringing the entire institution to ridicule. Nigerian judges themselves must see the need to set their institution on a path of renewal.

16. On the part of the executive, we pledge to make ourselves available and ready to partner with your Lordship on how to make the judiciary more efficient and inspire the generality of our citizens to become more confident about the capacity of the judiciary to do justice to all men.

17. To this end, this administration will give full support to your Lordship’s Reform Initiatives and necessary funding will be made available.

18. My Lords, Distinguished Ladies and Gentlemen, I will personally liaise with the National Assembly to support constitutional amendments necessary to further ensure the independence of the Judiciary and improve Judicial efficiency. Efforts would also be made to liaise with the State Governors to ensure that state judiciaries are also adequately provided for by giving full effect to the provision of S.121(3) of the Constitution of the Federal Republic of Nigeria.

19. Finally, I wish Hon. Justice DahiruMusdapher, CFR the best of luck as he assumes the leadership of the Nigerian judiciary.