WE WILL REMOVE JONATHAN – CPC 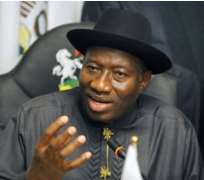 Rather, it insisted that it had enough evidence to prove its case at the tribunal and vowed to remove President Jonathan from office. At a press conference after its National Executive Committee (NEC) meeting at the party's headquarters in Abuja, the national chairman, Prince Tony Momoh, said contrary to speculations in the media, it would not discontinue with the litigation, as withdrawing it would set the country on fire.

Prince Momoh said although the party was denied access to vital documents that would have enabled it prove its case beyond any legal doubt, it still had enough evidence not only to continue with the case but also remove Goodluck.

Asked how the party intend to win the case without access to the vital documents, he said: 'We have witnesses and we are going to call them. The denial of access is causing us a major blank, which would have subjected the materials to forensic analysis.

'The electoral law is there to support us. The constitution is also there to support us and every other thing the court order directing us to have access to the data. We got the permission after writing about 14 letters to INEC. In a nutshell, I can conveniently tell you that we have enough evidence to prosecute and win the case.'

Speaking further, the CPC chairman said: 'We met over the case CPC filed in respect of the presidential election, which we maintain is flawed and the most manipulated election in the history of Nigeria's election. Obviously such statement is very weighty and we have to tell the tribunal what facts we have at our disposal to make such claim. We thought we could do so because the outcome of the forensic analysis has shown that we know those in the voting process that were removed and those who were not supposed to vote in a particular place but voted.

'Now, we have been denied access to the data that would have given us the opportunity to show that bulk of the votes announced were either multiple voting or they did not vote. The judgement of the Court of Appeal on May 24 stipulated that we should have access to all the data. It permitted us to have unrestrained access into the millions of ballot papers. But we were denied access.

'We met and everybody made contributions. We are aware that in Nigerian politics the CPC has been associated with more of patriotic politicking than being in opposition for its own sake, and we want to remain so. This case is on and we are not withdrawing for the basis of actions of a few. We will leave those people to the judgement of not just the present but the future and posterity.

'We will go the court, put the evidence we have in our possession now, call our own witnesses and let Nigerians know. But with definite understanding that we were denied access to due process, access to those materials that would have made us show beyond all reasonable doubt that what we said were flawed in the South South, South East, South West and some parts of the North were not just attempts to shout wolves but that we have the proof.

'If these proofs are denied and even with that disadvantage, we think it is in the interest of Nigeria and Nigerians and our supporters to go before the court and make our case to the best of our ability. By doing so, we have reduced the doubt in any mind in Nigeria that CPC is withdrawing from the case as reported in the media. Without any dissenting voice, the consensus is that CPC NEC has unanimously decided that the case is on.'