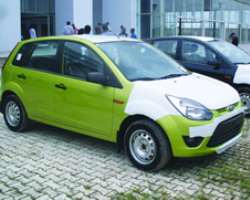 Friday September 09, 2011
• New Ford Figa
For a car with an uncommon reputation of seducing youthful buyers and earning awards in many markets upon arriving the dealerships' showrooms of any country, it may not be out of place to conclude that last weekend's unveiling of the new Ford Figo by Coscharis Motors Limited, was a move which the competitors in the compact car segment in Nigeria will ignore at their own peril.

Beyond awards and reputation, Figo has quite a number of factors banding in its favour. They include, but not limited to: The legendary brand name (Ford) represented by the blue oval badge; a fuel-efficient 1.4 (or 1.6) litre engine under the bonnet; a roomy interior that belies its size, thanks to the ingenuity of the designers; its aesthetic eloquence; an array of features that enhance the comfort of the driver and other occupants; and, of course (perhaps, most importantly), the safety package.

Presentation
These were the factors that emboldened Coscharis Motors' Executive Director, Sales & After-Sales, Raju Sawlani, when, while presenting Ford Figo to the motoring press on Saturday at Coscharis' Ford showroom in Victoria Island, Lagos, enthused that the car was poised to be very competitive in many regards, in addition to offering a tremendous value story for the customers.

The experienced auto marketer gave a hint of how pleased the manufacturer and Coscharis were with the new kid on the block: 'The Ford Figo has the best in class ride and handling…Ford feels that this is the perfect car to combat the ultra affordable Toyota Yaris, Hyundai Accent, Kia Picanto, Tata Nano, etc, in the market arena'.

Flanked by the Group General Manager (BMW & Ford), Sola Adigun, and the Divisional General Manager (Ford), Olalekan Adenuga, the executive director drew attention to Figo's contemporary shape, which he described as one that offers a distinct alternative to the traditional products in the city car segment. It is 'a shape that exudes the spirit of energy in motion, with its bold fender flares and swept back headlamps.'

Honours
The Coscharis Motors Ford Executive Director brought to the fore the city car's 'exploits' in India, a country which shares some motoring characteristics with Nigeria, saying, 'Figo has the best in class ride and handling with enough interior space and won most automobile awards in India since its launch…Ford Figo was designed and engineered to compete in India's small car segment, which accounts for more than 70 per cent of the new vehicle market. The Ford Figo is compact, yet roomy; fuel efficient, yet fun to drive; and bustling with substance for an incredible value'.

Exterior
Aesthetically, the car stands out. Judging by its modern headlamps, grille shape, sculpted bonnet and its distinctive face, to the subtle integrated spoiler, Sawlani is convinced that the Figo is filled with kinetic design touches. More evidence abound in the sculpted shape, the body side-chiseled front fenders, a 'comet tail' undercut in the doors and additional light-catching sculpting in the lower body.

Safety
Aside from being the natural choice for top honours in the area of safety of its occupants, there are pointers to the fact that Figo's fine attributes are not skin deep: A strong body structure with front and rear crumple zones, combines with driver and passenger airbags and safety belt pretensioners to help make Figo safe. An available anti-lock brake system adds even more protection.

Engine
Impressive fuel economy is achieved with a choice of a 1.4 liter Duratec engine with a manual transmission or a 1.6 litre Duratec engine with automatic transmission, thanks to Ford Eco-boost technology which offers less (Co2) fuel emission for more driving fun. 'This gives credence to Ford corporate philosophy of building a sustainable and environmental friendly world,' Sawlani informed his guests.

Interior
During a test-drive from the Ford showroom on Akin Adesola Street to Coscharis' ultra-modern, all-inclusive auto complex in Lekki, the journalists discovered practically the comfort derivable from the supportive and well-finished interior. They never had to worry about the heat, because an extra-large air conditioning compressor (said to have been tested in temperatures up to 49 degrees centigrade (12 degrees Fahrenheit), was on duty as they drove.

Noteworthy in the interior were the contrasting trim on the doors, easy-to-engage controls, door panel pocket on every door (each of which can hold a one-litre bottle of water), a CD player/radio data system that identifies the station tuned to and the central locking system.

The centre console integrated with the shift lever provides a place for small items and includes a cup holder, an available audio input jack for your MP3 player, and a 12-Volt accessory power outlet while a fuel display on the instrument panel tells you how far you can go before you need to fill up. It's all protected with the security of the Standard Anti-theft System.

Booth
It was also discovered during the test-drive that a large rear hatch opening makes it easy to feel the 10 cubic trunk space. When you remove the rear package shelf and pull-up the rear seat back, you have simply expanded the cargo area to 33 cubic.

Targets: Young minds, taxi operators
Naturally, a Ford car in showroom is for any discerning buyer, who has the money but according to the Ford Divisional General Manager, young managers in corporate organisations, youthful executives, campus girls and anybody who wants a city car that can 'riggle' through the maze of urban traffic with ease, would be making an appropriate choice, if they go for the new Figo.

Adenuga, however, added: 'On the other hand, if you are a taxi operator or you are involved in running cab scheme as a means of alleviating poverty or providing dividends of democracy, the new Ford Figo fits the bill, and I am sure many state governments will soon discover this fact'.

After-Sales Back-Up
Adigun disclosed that the Coscharis Motors after-sales network was made ready for the arrival of the Figo, adding that parts of the preparation were training and courses for both the workshop and marketing staff, while replacement parts were stocked well ahead.

At the Lekki facility, which the Coscharis Group plans to open in the next few months, the journalists were amazed by the vastness of the investment, proposed showrooms for the many brands, provisions for state-of-the-art service equipment and large depots for holding parts stocks. It may well be the new reference point in the industry when it is opened.