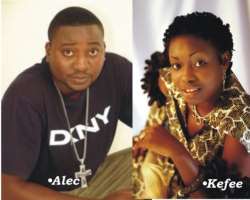 Alec and Keffee
Listen to article

IT seems that the love-turned-sour relationship between music producer and label owner, Alec Godwin and his erstwhile lovely wife, Kefee of the Branama fame has entered another level.

The duo who were once amongst one of the most celebrated musical couple in the country went their separate ways last year after a row that was unconnected to an accusation made by one of the artistes on their label who felt cheated. Since the unfortunate incident, the relationship that started on a musical foundation and matured from Choir Master marrying the youngest member of his choir, has went from bad to worse with both drawing vendetta on themselves on the faces of papers, soft sell magazines, the internet and television.

When http://nollywoodgists.com thought that the matter had rested with Alec moving on with his Alec Music and Entertainment outfit while Kefee took glorious steps into launching her new album and clothing line, another dimension has been initiated from Alec Godwin as he has released a single entitled You and I which it seems is targeted at Kefee as the lyrics stenches heavily of their affair. The four-minute single starts with an intro describing the story as the greatest story ever told before the first verse comes with a lyrical description of the couple having something going on, “Uuhh we had something going on/The feeling was so strong/Cant believe its happening/hoping I've been dreaming.”

The first verse may seem to be harmless but the second is where the lyrical punch meant for Kefee comes when Alec's paints a picture of 'his' travails thus: “Everywhere I turn, its stories of you and I /On the TV screen, on the radio, you and I /In the magazines, all over its, you and I/I cant take it anymore/I want my life back as before/Yo, yo Before I met you, before I said I love u/Before you said yes, before our first kiss/Before the stardom, before the random/Heartaches, heartbreaks and all the aches .

The lies, the cries, the rain of pain The flow of shame, the weight of crane/I free myself in Jesus name/Now my life will never be the same.” If one is deceived into believing that Alec might be looking for a truce, the last verse where he makes it clear that he does not want Kefee back again with the lines, “Its too late now, we cant go back/Its too late now, its over now/you and I, you & I/ baby/ Uuh this is a flop.” Many observers are of the opinion that Alec should grow up and leave Kefee alone to continue with her life and career than always flogging a dead horse.