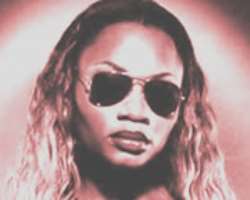 Many and diverse are the names under which this young artist is known in Europe and Asia.

Black Venus, Black Pearl, The Black Panther of Soul, The Black Swan, are among the nicknames the public has coined, but they all agree that beyond her sensual and exotic beauty, we are confronted with one of the most beautiful female voices rising in the R&B firmament.

Blessing Odiase is for many a real blessing for the international music scene. Her first name and former stage name “Blessing” has grown into “Blessing Odiase”, proud of her roots, thereby incorporating her father's family name.

When she appears on the stage and the magic notes begin to come out of her soul, the audience loses the notion of time while they are transported to a world where the daily problems get soothed with the singular sound of her voice.

For a character like her, 1.8 meters tall, the shape of a super model and spectacular voice, any comparison is difficult to make.

Blessing began singing as a child in Nigeria when she used to accompany her parents to church where she started singing gospel songs. Blessing already had a special aura then, with her first chords, the coloured harmonics of her voice, would touch the soul of the church congregation.

Blessing's artistic career has exposed her to a wide spectrum of activities. Her natural talent for music and art has allowed her to be close to many big stars who have acknowledged her impressive physical energy and the promise of stardom that destiny has instilled for her.

In 1998, during the James Brown in Europe Tour where Blessing Odiase appeared as host and supporting act for James Brown, the late godfather of Soul saw she was destined to go far in the world of music, acknowledging that aside from her magnetic personality and great voice, she has a special stage control. With these qualities, Blessing immediately won the respect and love of the legend of soul, who also warned her that her talent is not only an advantage but could become the source of envy in this competitive environment.

Some years have passed by since the appearance of her first single, Be Cool when Kim Mazelle of Soul II Soul and Matt Bianco encouraged her to pursue her singing career further. This single positioned her in the ranking of Italy, France and Asia. Her second single, No rain, no shine, released after her successful tour with James Brown, stayed for six months on the Asian charts.

Blessing has shared the stage with artistes like Simply Red, Jamiroquai, Santa Esmeralda, Jimmy Bo Horn, Gloria Gaynor, and the Ritchie Family, among others. She participated in the San Remo Music Festival in the Kremlin in Moscow, Russia, a three-day TV show that brought the 35 world renown veterans of the Italian musical scene together; like Antonello Venditti, Albano, Luccio Dalla, Matia Bazar, Toto Cotugno, Tony Esposito, among others; a show where Blessing captivated her audience with her unforgettable stage presence and voice. Following this warm welcome from the muscovite public, Blessing was invited with Tony Esposito to sing again in a special concert for the business and political elite of the Russian society.

Among her successful songs is Malafemmena, her own English version of the mythical Napolitanian anthem written by Antony de Curtis (Toto). This song became the soundtrack of the movie "Malefemmene" (Women Behind Bars) with Giovanna Mezzogiorno, produced by Medusa films of Silvio Berlusconi. This song was published by the Italian newspaper “La Reppublica”, selling more than 100,000 copies in Italy and still selling till date.

During the time that followed, Blessing wrote the song My Angel, dedicated to her grandmother, princess Aimukponaoko C. Obadagbonyi of Benin City, the angel that raised her . This wise woman still illuminates Blessing's path with her infinite spirit."My grandmother always told me that forgiveness is charity and love".

My Angel was included in her first album Narrow Street of Time, distributed in Europe by Universal Records. Blessing is the face of Tonnino Lamborghini Fashion. This prestigious Italian company chooses the song My Angel for their TV advert that is being shown in Europe, Asia and USA.

She has modelled for many international fashion houses. Her exotic and divine beauty has been the inspiration of diverse fashion icons like the status statement design house Fendi, Enrico Castelli, Miss Sixty, Jackal Milano and others.

Last year, during the International Film Festival in Venice, Blessing was invited to sing at La Dolce Vitta Gala, this performance was followed by a presentation at the mega Yacht Octopus of Paul Allen.

Recently, she worked with Trevor Morais, the talented producer behind Private Dancer with Tina Turner and many other Platinum and Gold records with artistes like Mariah Carey, Biörk, Company Segundo, Sade, Howard Jones, Joaquin Sabina, Rammstein, among others; the result of his production is the remake of My Angel.

This diva hails from the Odiase royal family of the Edo kingdom. This can be felt on the elegant attitude that characterises her conversation and movements. This elegance, coupled with her talent and beauty, caught the attention of Prince Albert of Monaco, who saw in Blessing a person with whom he felt at ease and with whom he could share a future together, but destiny wanted her to pursue her artistic career further. His friendship and love for her person and voice still remains.