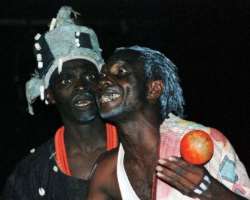 A Scene from the play Photo: SOIBIFA DOKUBO
Listen to article

Hastings Kamuzu Banda, Mobutu Sese Seko, Haile Selassie, Jean Bedel Bokassa, Idi Amin Dada, and Sanni Abacha were dictators who got their just desserts. As it was for these late tyrants, so it is for Oba Aderemi Mojagbe in Ahmed Yerima's play, 'Mojagbe'.

With the aid of his sorcerer, Isepe (Abiodun James), he blocks the mouth of death by killing his own mother. He whets the throat of death with the blood of his first wife and appeases death with the six foetuses in his young bride's womb.

With his powers, Mojagbe becomes tyrannical and his chiefs, people and even spirits of the village begin to plot his removal. Layewu (Olatunde Wahab), the community's masquerade of death, is invoked by the four leaders of the village's witches against Mojagbe. The masquerade opens its face to the king, a taboo - but he remains unshaken, with the assistance of Isepe. A white calabash which signifies that the villagers want him to commit suicide is placed on his throne but he breaks it in the presence of his chiefs whom he calls "Old fools"].

Esan (Ogunleye Mololuwa), the son of a former King also comes to assassinate the king but is caught. Mojagbe orders that Esan be beheaded in the market square as a deterrent to other insurgents. Abese (Shodiya Omololu), the King's messenger, who has served three previous Kings, is given the task but the old man who walks in a shuffle remonstrates with the King to no effect.

The women of the town refuse to allow Esan to be killed and protest half naked to the palace. The women flee the palace when the King threatens to unleash sex starved slaves from another community on them. The manner of flight of the women and old witches is one of the comical parts of the tragic play.

The witches put a hex on the King that manifests when some youth from Igbaodo, murder a family from Mojagbe's village. He is about to lead an assault on Igbaodo when Isepe warns him not to go. Among other warnings, Mojagbe must not go to any war; must pick only one item from the war booty; and must not receive any visitor no matter the status.

The King becomes angry when he realises that he has no power over death after all, and kills Isepe. He stays at home and picks a maiden, the daughter of a herbalist, from the war booty. The King and chiefs are partying when three messengers arrive from Oyo with a message from Alaafin Maku, seeking to know why Mojagbe has refused to pay tributes. Against advice, Mojagbe chooses war and orders Abese to throw out the messengers who are indeed war generals from Oyo who lay a siege on his town.

By 234next
Like Macbeth, Mojagbe is a tragedy in which the dark arts feature prominently. It also opens with the witches who come to instigate Layewu against Mojagbe. To properly create the ambience of fear, the witches come on stage singing 'Ogberi Sigba Awo', the late Hubert Ogunde's song eulogising witches.

Although Yerima refuses to disclose the name of the village in the play, probably to underscore the universality of dictatorship which he condemns, he lightens it by making Mojagbe die through a woman - death-in-disguise, Motunrayo. Immediately Motunrayo starts to caress him, some members of the audience start shouting: 'Abacha', 'Apple' and 'Omoge' - in reference to widely circulated rumours that Nigeria's late dictator, Sanni Abacha, died after eating an apple during a romp with Indian prostitutes.

Directed by Otun Rasheed and featuring students of the Creative Arts Department of the University of Lagos, Mojagbe (whose command performance took place on Monday, May 25) had flaws. Apart from the stage design being a bit elementary, it was obvious that Diabuah Patrick - playing Mojagbe - crammed his lines as he paused often and mixed up Abese and Isepe's names consistently. The fickle Isepe, however, made people laugh with his antics and double speak to the King.