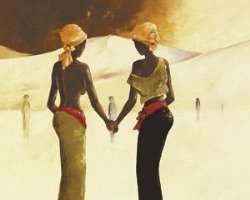 Most men call them the weaker sex, some say they are lazy for comfort while others conclude they complain about every little effort or services they render. These are the descriptions of women by our male folk

Weaker sex indeed! It is pertinent to note that women contribute meaningfully to the upkeep of their homes, so why must their efforts, no matter how little not be noticed, appreciated and rewarded accordingly.

No woman sits down at home nowadays as full time or centre table house wife. They toil day and night to supplement the effort of their husbands.

They carry available loads, peel all the orange during the season and travel distances, by night and in rickety vehicles to buy items to sell for survival. It is very unfair to womanhood that their efforts are not commended.

This same weaker sex wrap babies on their back while performing their domestic duties. There are families who live in storey building and have no regular supply of water, it is the weaker sex that place buckets on their heads to get water for household use.

In a typical African society, those are the obligation a woman owes her family. A typical African culture demands that the women sit at home and take care of the family. She is the last to be considered for formal education. The man goes to the farm or to the stream to fish while she tidies up the home and prepares any available food for the man or possibly takes it to the farm.

Cultivation has introduced to the society a culture of education and job opportunities for the women. Those who for one reason or the other could not acquire education go into trading.

Women are seen every day with babies wrapped on their backs selling one thing or the other yet they are the weaker sex.

For no reason would she return home after much “blessing” from the sun and the rain, and refuse her man his meal. She must run into the kitchen to prepare his meal. Yet, they are the weaker sex.

If it were possible for men to carry pregnancies. I believe they should be given a chance so that the pains would be felt by both parents