Should your spouse know your ATM code? 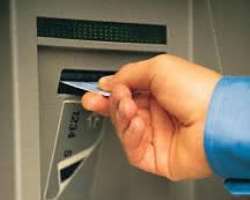 Any Time Money (ATM) banking is a break through that has brought revolution into modern banking services in Nigeria as it remains one of the fastest means of accessing cash from the banks.

ATM gives one direct access to quick cash. But, the secrecy attached to it has become a new test of trust on the part of couples.

How many married men and women can trust or reveal to their beloved partners the secret code which guarantees access?

http://nollywoodgists.com survey on this issue reveals the strategies which couples have adopted in handling cash cards.

Bright, a banker said he cannot in the name of love or trust reveal the secret number of his ATM cards to his wife. He predicated his stand on the banking law which prohibits any customer holding the card to reveal the confidential code numbers to any person.

“I can't quote or reveal the serial number no matter how much I love my wife because the banking policy prohibits such exposition, to any third party and that is why you are warned not to show it to even staff of the bank, he said.

He said the risk involved in such exposition is great and in the event of any eventuality, it becomes difficult to get who could be responsible.

Evangelist Nduka however said because a husband and wife are being viewed as one by the Bible, there is suppose to be enough love and trust amongst couples to guarantee proper handling of such confidentiality.

“ I will not fail to show my wife the secret code so that she too can go and withdraw money with it for the family, especially when I don't have the time to do so,” he stated.

The clergy said his wife knows all the account numbers because the money belongs to the family where both the man and the woman are the major stakeholders.

“So even if I hold multiple ATM cards, nothing stops me from showing or entrusting her with the code number with which I can withdraw cash from the banks,” he maintained.

Price Emmanuel Ogba, a business man also believes that couples should share such confidential matters with one another because of the high level of trust and love that bound them together.

“I shall reveal the number to my wife based on the natural love and trust I have for her and I believe that she will be responsible about it.”

Beatrice, a trader who has been married for past 22 years said as a wife, it is expected that she should be submissive to her husband by Africa tradition and biblical injunction.

“I have two cash cards and my husband knows the secret code numbers, and a times he goes to the bank to check my account and to make withdrawals when occasion demand,” she submitted.

Beatrice said she never entertained any fear of the husband trying to act funny about it in any way, because she trusts him.

But for Onengia, a legal practitioner, showing your spouse the secret code of your cash card is not a way of showing that you love or trust her.

He expressed fear of the implication of betrayal by some wives that may wish to be smart as they will take undue advantage of such opportunity to defraud the man.

If you consider the story of Delilah in the bible and other such painful experiences from women, you cannot trust a wife with such things,” he said.

Grace, a journalist and a wife said, showing such a cash card to your spouse depends on how one trust his or her partner.

“If you think your partner is that trustworthy, then you can reveal it to him. If not, it would be foolish to show him because in this men-controlled world, most husbands would begin to claim ownership of the money as they claim to own the woman.

She confessed that she has two cards but managed to show her husband one and concealed the other incase of any eventuality.

Similar opinion was expressed by Mr. Christmas, a transporter based in Port Harcourt. According to him, he decided to operate several accounts most of which are not known by his wife.

He said as long as he lives up to his family responsibilities as a man and husband, he does not believe that showing her your credit card confidential number is necessary.

He concluded that at worst he can. reveal the number of some of the accounts and cards codes to her but would still keep the rest to himself as the head of the family.

Another respondent Mr Inko-Taria is a bit different. He is a polygamist and would not imagine what would make him to reveal such confidential things to his wives.

Inko- Taria who has three wives explained that revealing the numbers to one of the wives would stir up serious misunderstanding amongst her mates and that would creat bad blood.

“I can't expose to any of them the secret numbers and I cannot even discuss that with my wives because of its dangerous implications,” he said.

He said life is full of several disappointing experiences where one partner could spring surprises that make the man look like a fool because he was trusting a woman.

According to him, such a situation calls for extreme caution on the part of the man but accepted that the wives are supposed to show all their secret codes to the husbands because they are supposed to be under them in whatever they do.

He said any wife who hides such code from the husband has ulterior motive which if not addressed could cause serious problems in the home.

Prince Cletus, on offshore worker however took some extreme stand when he said “it is madness thinking of entrusting a woman with my ATM cash card. If any fraud is commtted because of such trust, whom shall you hold responsible” he queried.

“If my wife insists that show her my card code, then she must be up to something which I am sure, she cannot get.” he concluded.

Jennifer, a lecturer and housewife said, “ I used to operate a joint account with my husband until when few years ago, he took advantage of my trust to acquire a second wife to himself. Since then, such trust has gone.”

“ Even though he is my husband and I am expected to be submissive, I don't think exposing the confidential code numbers of my cash cards is part of that submissiveness.

“ If he is broke or is in dire need of money and approaches me for some financial assistance, that is different, but to demand to know the secret code will not be acceptable to me. never at all,” she maintained. What do you think?