‘I Nearly Called it Quits’-----Grace Amah 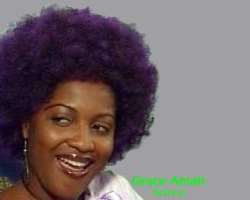 Her simple but pretty face and petite stature easily sets her apart in a gathering of friends and colleagues in the make- believe world of film making. Grace Amah, a lady who kept millions of television viewers on the edge of their seats a few years ago when she played the character, Tayo in the immensely popular Super Story sieries was particurlary outstading in the one entitled One Bad Apple.

Many who have over the years followed her success story in the business of acting would readily acknowledge her steady rise from a 'nobody' to a prolific actress who is today ranked among one of Nollywood's best as the product of hardwarok. Indeed, Amah is very versatile, be it in the popular English- speaking movies or the Yoruba genre.

Amah has top actress, Liz Benson–who she couldn't just gstop prasing for motivating her-to thank for trudging that path.
Soon after her secondary education at Stadium High School, Surulere, Amah had taken the bold step of pursuing her dreams.
“It was in August of 1999. I just went to Winnis Hotel (a popular hangout for Nigerian actors and actresses) and I met Frank Obanka and Ayo Adesanya. A week later, I got a call,” she recalled.

But when eventually the jouney commenced, it was not all that rosy as a movie drought soon hit her real bad. Well, as tough times don't last; only tough people do, she hung on despite several temptations to call it quits. Not too long aftewards, the roles started coming and then the big one, One Bad Apple from the stable of Wale Adenuga. This was followed by Elastic Limits and many others, setting Amah off on the great highway to stardom.

The first child in a family of four children, Amah confessed that growing up was fun but without a silver spoon. Her dad who she describes as a disciplinarian was strict and never wanted his kids involved in the movies, mainly because of several negative reports which trail the practitioners. “But I was able to pull through because I was determined and focused,” Amah told http://nollywoodgists.com.
Nevertheless, in time, her dad got to warn up with her profession and today, “my family is so proud of me because I have not put them to shame. I know where I come from and I will not disappoint them.”

Amah is a graduate of Creative Arts from the University of Lagos. Do enjoy our discussion with her.

A lot of people regard you as a controversy-shy actress. How have you been able to do this?

I am not a controversial person because I try to be myself always by living my simple lifestyle and staying away from scandals.

But sometime ago, some not-too-pleasant stories were written about you?

Yes, the press had done that to me but I kept cool and moved on. Teco Benson, a producer once told me that if you really want to be a public figure, you should learn to accept criticism to an extent. Actresses are associated with scandals, but as much as possible, I try to stay away from them because I don't think its really nice for people to keep hearing things (a- times negative) about you.

But many insist that such controversies makes artistes even more popular.

It's true. But judging by the kind of media we have here, I don't think its healthy. Being too popular is not good for African women because the men tend to misunderstand them.

What do you mean by “the kind of media we have here?”

The press don't help matters here. The try to blow things out of proportion, and in some cases, many tend to misunderstand some things you people write (laughs).

Some of your fans take you more as a Yoruba woman because you appear in several Yoruba movies. Now, tell me, which are you: Yoruba or Igbo?

I am from Ebonyi State actually, Ebunwana, Edda in Afikpo South local government area. That is to say I am Igbo. But I was born and brought up in Lagos, that's why I speak the language (Yoruba) fluently and appear in Yoruba movies too.

How did you venture into Nollywood?

Well, it was in August, 1999 that I decided to come into the industry. I had just finished my secondary education and was awaiting my JAMB results. Before this time, however, I had always wanted to be like Liz Benson. So when I finished secondary school, I decided to try out what I've always wanted to do. I knew that I needed to further my education, but I also wanted something that would keep me busy before I got into school espeically as I never wanted to be a burden to my parents. Unfortunately for me, I used to think that when you got into the acting world, the roles would just keep pouring in easily and the money too will follow, but it didn't happen that way at all. One good thing that happened was that I got a role just a week after I went to Winnis and met Frank Obanka and Ayo Adesanya. They needed someone to play a 13-year-old girl in the movie, Chain which was directed by Lancelot Oduwa- Imasuen. That was how I started and I got the misconception that if in just a week I could get a role, then it would surely be a sweet ride. But right after that, I attended a lot of auditions and my name never came up and I really felt bad. I almost got discouraged but something kept pushing me to go ahead. I'll wake up, as early as 6 a.m, run to the audition venue to write my name, go back home to do my chores, then go back for the main audition and at the end of the day, you get disappointed. Well, I thank God that with time, hardwork and prayers, it all changed and roles started coming.

So after that one role, when, or rather how did you get another? And which gave you that desired break?

It was a year or two later. I did Elastic Limit and a few others. But I got my break through in Super Story because it is a television thing and people get to see it from all over. That series was done about four years ago and it was titled One Bad Apple. I played Tayo.

Before Super Story, did you appear in any Yoruba movie?

Yes, a couple of them. I did Agbeke, Ewo Kole Wole, Ogu ko de, Iru Oka, which featured Ramsey Noah, Segun Arinze, et cetera. It made a huge sale and impact.

So, after Super Story, the big roles started coming?

Well, I did some lead roles. But apart from Super Story, Izozo also helped a great deal.

You've not been a regular face ever since, what happened?

Schooling took me out of the scene for a while but I am done now. I studied Creative Arts at the University of Lagos. It was a five-year course.

But some of your colleagues who school find a way of juggling both?

If you find out from them, they'll tell you they didn't find it easy. Some of them at some point would have had issues. I worked too but you know, some producers do not release their movies on time. Some movies I shot over four years now are not even out. In such case you feel the person is not working. I am still very much in the industry, it's just that I wasn't working as much as I used to because I was in school. I finished last year.

How were you able to manage fame in school?

I think I managed well but some people were “beefing” me. I really faced a whole lot of that. There is normally this believe that popular faces are mostly snubs. Yes, some are. But some people who got close to me saw that I am different, that I try as much as possible to mix up with people who are willing to mix up with me. Till date, I have the same issue with some of the people who went to secondary school with me. They don't know if I am the same person I was back in school. They stay away from me even when I greet them.

Between the Yoruba and English-speaking movies which do you feel more comfortable appearing in?

I'll say English because it is a language almost everybody understands. I am not a Yoruba woman, I only grew up here and there are some characters/role that I just can't play. I don't really know the tradition, so to speak. I can only speak the very popular street Yoruba and not the difficult aspects of it.

Some actors and actresses choose who they'll rather be seen with on set. Are you one of them too?

No, I am not. I have worked with a lot of them and I have noticed that when you work with people you know, you tend to flow better than people you are not used to. But that shouldn't be a reason why an actor shouldn't potray his character well. Even if you are given a role to play with a mad person, you should be able to carry your role well. An actor is an actor any time. Having said that, I just want to mention that I love to work with Desmond Elliot, Stella Damascus-Nzeribe, Liz Benson, Ramsey Noah, Kate Henshaw. I love to work with people who can bring out that part in you that you never knew was there. These people I mentioned are pure professionals, anytime, anyday.

How expensive are you?

To start with, we are not paid well here in Nigeria. We don't get what we are worth. But as much as possible we try to earn reasonably. I am not that expensive.

Quite a number of your colleagues are getting married, when is yours coming?

You are one of the very few actresses who have received awards from different parts of the world. Tell me about them.

Thank you. Yes, in 2007 I won the Afro-Hollywood Award in the United Kingdom. The same year I won the Best Movie Act in the Dynamics Award. In 2006, I won another in the National Youth Organisation and a couple of others.

How and where do you see yourself in 20 years time.

Surely, I'll be a married woman with a family. I pray not to be on the big side anyway because I know I have the tendency, but I have to watch it. I may not be in the acting world but I may still be in the arts because I like to be creative with my hands. I would love to open a fashion house someday. If my man doesn't want me to act, that means I would be in that line of business.