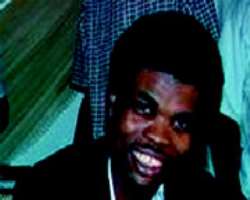 Fagade may not ring a bell loud enough, but mention Omo Baba No 1 and it will generate a response that only befit a star.
Omo Baba is not just a comedian. In fact, he is rated among the first top 10 humour merchants that Nigeria can pride itself with. Omo Baba is probably the only comedian in the country who goes by multiple stage names. If he is not called Fine Boy, Sexy Dude or even Most Handsome, he is called Wowo (ugly).

Ugly, you say? Well, that's Omo Baba for you. He answers to anything you call him and goes further to make a huge joke out of it, often making people reel with laughter.

Last week, http://nollywoodgists.com met with him and it was a very successful comedian who gave us a ride in his expensive NISSAN PATHFINDER SUV to his posh flat in the heart of Abule-Egba, a Lagos suburb .

Fagade, who didn't disclose his age to us, had a story to tell, and he did tell it well. The rib-eracker who was discovered at a church programme is a graduate of Industrial Relations and Personnel Management. of the Lagos State University, Ojo.

Originally from Ilesha in Osun State, Omo Baba grew up in Abule-Egba. He had a great childhood, being the last kid in a family of seven. Recently he won an award as the Best Comedian in Nigeria. This was at the Future Award. Even though he said he appreciated it, his real honour, he told The Source, comes from the people he brings joy into their lives.

For Omo Baba. Marriage is not in his mind for now, because “I'll be going to Oxford University in London soon, to pursue my masters.”
One only needs to get close to this artiste to know that he is, infact, a shy person who really loves to play his video games and design clothes. Indeed, he has a whole lot of talents.

We serve you our chat with this gifted comedian. Excerpts.

Some comedians maintain a style: They are either Christian Comedians or strictly attackers of the opposite sex. Which one are you?
I do not have a particular style. All I do is make people laugh and not crack vulgar jokes. I make both the rich and poor laugh. Young and old. I do what I'll call clean jokes. When I started comedy, I thought of creating an identity for myself. Like in Nigeria today, I am about the only comedian with five names. While some call me Most Handsome or Sexy Dude, others say I am Fine Boy, The Original Omo Baba I or Wowo. I have always wanted a situation whereby I'll be seen in a different dimension. I am the only comedian who goes on stage and not pick on my audience. Instead, I pick on myself because I know people would love that. If I yab myself people laugh. But as I do that and you want to yab me more, I may pick on you, because that's the condition.

First of all, I picked my style because there were so many strong names in the industry then, that I had to break forth and have my own space and by doing that, I had to do more music, pick on myself and mostly talked about children. So, as you know, I do more of kiddies jokes. Generally, I try to make my jokes as clean as possible. Make them very reasonable. The jokes that would even make adults laugh and take them back memory lane.

You don't seem to get angry when you are called Wowo by your fans. You even call yourself the most “Handsome” comedian in Nigeria?
I say it's just to have an identity. You know, say it, so that people would have something to talk about when you are not there. It reminds them of you. They say 'Ha, you don't know Omo Baba, that fine boy?' And to tell you the truth, whether you like it or not, I am handsome. I just decided to sell myself the way I do.

We now know you started cracking ribs from the church. When did you go professional?

Hmm! I was doing it in my area in Abule-Egba, a Lagos suburb in 2001. In that years I missed the auditioning of the Night of a Thousand Laughs to join big names like Ali Baba, the late Danjuma, Basket Mouth, etc. But in 2003, I had the opportunity and luck to be the only comedian selected from the numerous old and new names lined up at O'JEZ Restaurant. Back then it was very difficult to make it to that stage. But now, it is quite easy, so we had the show and it was a great one and to the glory of God I did well. That night I got three engagements and from then, people started seeing me and I kept getting references from people like Ali Baba, Basket Mouth, Gbenga Adeyinka. They introduced me to lots of clients and from there, I got nine. Basket Mouth and Adeyinka really tried for me. Today, I have a cordial relationship with virtually all the comedians in the country.

Comedians are really very expensive to hire. Tell me, how expensive are you?

All I can say is that I am very reasonable. I work for everybody, that is why I can't afford not to be. I am expensive though, but very reasonable. I can't tell you my fee because I don't want EFCC to come after me and they'll say 'You mean he is only just talking and making such amount? Invite him over.'

How do you generate your jokes?

God gives talent. Secondly, our day to day activities also contribute to it. Nigeria is a funny place. We have funny people, programmes, etc. Our day to day experiences could be made funny. People tell their experiences to friends and colleagues and they laugh. It also has to do with one's knowledge that was acquired in school, because to make money now, it's not about speaking only pidgin English. It's more about your ability to communicate well and getting along with your audience. I take my jokes from all walk of life. I give spontaneous jokes, I form jokes from what I can see in the papers because I read a lot.

Tell me, have you ever gotten into trouble with any of your jokes?

I wouldn't want to call it “trouble” but a setback. In one of my comedy-songs, I was mentioning handsome people and their opposites, so the first day it was aired on radio, the station was ordered not to play it again. I felt if I gave the CD to other stations the same thing would happen. So I decided to go back to the studio to edit the song. Now, I didn't even mention any name, let the listener decide who I may be talking about. But when I am at any event, I play the original copy. Don't get me wrong. All the people I mentioned are close to me. I say the truth. The people I talked about should know that I do not intend to bring any negative side of them. I am just trying to say to them that whatever they are doing, they are being noticed. They are relevant to the society. The video would be out soon.

I learned that you'll be getting married soon?

From who? All I can say is that God's time is the best. A while ago I was thinking about it but now, I have changed my mind. Not only my mind but God's mind. It gets to be news when people like you know that I am getting married. However, it is going to be a very bad news to read in the softsells that Omo Baba's marriage has gone in shambles.

Did someone recently break your heart?

No. It's just a matter of proper timing. One needs to take time to know who he or she is getting married to. Marriage is between two people, not the guests you invite to come eat your food when you get married. When the right time comes, I will definitely get married. But for now, I am single. If you want to search for me, feel free.

If not a comedian, where do you think you would have been?

Maybe a footballer or a musician. From when I was small, I had this strong feeling that I was going to impact on people's lives positively and would work for nobody but myself.

In other words, comedy has been very profitable?

Of course. If it were not, I wouldn't be in this position I am today.

Some people are wondering why you have not deemed it fit to join your counterparts in the high-brow areas of Victoria Island or Lekki. Are
you thinking of doing that?

You have a unique dress style; what informs it?

Well, I wear things that fit me. I don't go for names. Most times I design what I wear. That is another part of me. I design clothes for those who are close to me. I have good body structure for clothes, so I can wear almost anything. I look good in them. I draw well. Concerning my hairstyle, I keep an afro-style because I am very hairy. I don't think you have more hair product than I do because I take good care of my hair. I can take it off tomorrow but for now, I like it the way it is and I take care of it. In my area, I have two people who are maintaining it for me.

How did you get the name “Omo Baba”?

Well, like I said, I sing. One day in church I was doing my ministration in Afrobeat gospel. People loved it. So, after the event, an elderly man walked up to me and said “se yin na loma Baba”
Are you also the son of Baba? I thought he was referring to my dad, because he is elderly, so I answered in the affirmative. He then said “Thank God. You are singing gospel. Not like your brothers, Seun and Femi who are doing something else.” I then realised he mistook me as one of Fela Anikulapo-Kuti's children, so I quickly told him that I am not Fela's son. Later, I thought about what he had said and then concluded that Baba means Father in English. God is the father of all fathers on earth and he is my father. I then decided to adopt the name, Omo Baba No1, meaning, the first child of God.