Whittiker gets chieftaincy title after DNA reveals his Igbo identity 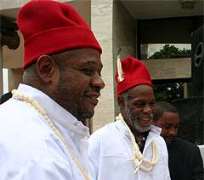 For Forest Whittiker and his compatriot Danny Glover it was sweet home coming on Sunday April 5, 2009, when the traditional ruler and people of Nkwere, Imo state welcomed him with a chieftaincy title after taking part at the just concluded African Movie Academy Awards in Bayelsa. The sleepy town went in wild jubilation when the motorcade entered the ancient palace of Eshi of Nkwere while the traditional drummers and women dancers welcomed the guests with songs of praises.

The African-American A-List Hollywood stars were introduced to the people and chiefs of the ancient town by Chief Nze Chukwuka Anyiam-Osigwe, the eldest son of the Anyiam-Osigwe brothers who also is a title chief of Nkwerre.

The elated Anyiam-Osigwe told the jubilant crowd at the palace of Eze Dr. Chijioke Jeki Okwara IV, that the coming of Danny Glover and Forest Whittiker was the greatest thing to happen to black history as history was made on the day the two men re-establish their connection with their root.

Forest Whittiker has done a DNA which revealed that he has Igbo ancestral root and a link with Nkwerre people. The eldest Anyiam-Osigwe said, ''This is our lost brother. We have found him and brought him home. It is only an Nkwere man that can find his way home after many years. We are a people from unparallel kingdom. We are pride of Igboland. Today our brother Whittiker and his friend Mr. Glover will be made Nkwerre Chiefs and it is not an easy task to be an Nkwerre chief because there are only 30 Nkwerre chiefs in the whole world,'' he said.

After introducing the Hollywood stars to the people and chiefs, the King ordered they be brought inside the inner chamber for traditional rites preceding their final confirmation as chiefs. It was an emotional one for Whittiker who has been working all his life to establish direct contact with his ancestral Igboland and the quest was made possible by attending the UBA-AMAA awards in Nigeria as a star guest.

After the traditional rite of hand washing before the breaking of Kolanut which signifies purity and cleansing the Eze Okwara IV, Eshi of Nkwere called on the Eze Anyiam-Osigwe, the eldest of the Anyiam Osigwe brothers to once again confirm if the guests are worthy to be made Chiefs of Nkwerre. Before the 20 heads of Villages that made up of Nkwerre, Eze Anyiam-Osigwe proclaims that worthiness of Glover and Whittiker to be chiefs of Nkwerre.

''Danny Glover is a member of our family for his attitude and ways of assistance to us. Being an Nkwerre chief will help us socially, culturally and economically as our dream of a film village and film institute will be realised with Danny and Whittiker as chiefs of our town. They are good people. We present them as worthy of being chiefs of Nkwerre,'' Anyiam Osigwe declared.

Upon the public affirmation of the duo as worthy of the honour, Eze Okwara asked the palace chief to bring out a live eagle, a symbol of strength, vigour and power to complete the chieftaincy rite. The king removed the feathers of the eagle and stuck it in a red cap before both men wore their caps as red cap chiefs of Nkwerre.

The traditional ruler of Nkwerre told the people at the ceremony that good things are happening to black race with a black man becoming American President.

''The black race is an intelligent race. You will see how the Obama stimulus package will bail out the world economy already in recession. It is the same level of black intelligence that made it possible for our son and brother to get to the height of their career as Hollywood stars.

''When you get to America tell them you have discovered your root,'' he told Whitter. He went further, ''This meeting today will bring a relationship of partnership between Nkwerre and African-American through cultural exchange and economic opportunities,'' the monarch explained.

While accepting the honour, the two men thanked the people and the king for accepting them and recognising their achievements as movie stars and for finding them worthy to be honoured. They promised the people that they will live up to the demand of their traditional offices.