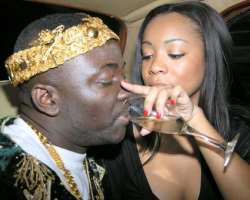 Biobele is in her thirties. She is one of those women you can safely refer to as terrors.

As far as she is concerned she had her share of lovely dovey relationship that led no- where.

Much as she loved to go to the altar like all her friends, luck has not been on her side for one reason or the other, she always lost out in the love game, may be she never got her priorities right, picked the wrong men or left them ride roughshod over her while the affairs lasted.

But that was then, when she was a lamb ready to sacrifice her herself for love and marriage.

Today or until recently when I saw her, she has changed her ambition. She took her focus off the altar. And the stories that circulated about her were simply unprintable, she had affair strictly with moneyed men whether they were old enough to be her grand pa.

She has a plot of land in Port Harcourt and a driver. Apart from her job, she has a boutique and travels abroad often at least five times a year courtesy of her rich sugar daddies.

Then early last year, she was transferred to Abuja and she decided to dump the Port Harcourt guys and latch on to a real rich man here in Abuja and she met one. Isn't Abuja full of rich men so she got herself a very rich retired soldier whom Biobele figured was a perfect gentleman.

She mistook the khaki chief's barrack discipline for gentlemanliness.

Biobele began to become too fond of him and was even contemplating having a baby for him only this time around Bobo soldier is too smart, much smarter than all other daddies Biobele had been dealing with.

Whe I saw her last week, she was looking haggard and forlorn that she could easily pass for a dying AIDS patient.

Her khaki soldier daddy has dealt with her ruthlessly.

When we got talking I actually shed tears for her. She now narrated her story.

I met the retired Colonel in Port Harcourt, my base, in company of a contractor, his friend.

From the beginning, he did not hide how much he cherished his wife and four children and he was generous too, almost to a fault. He bought me a second car, rented a duplex for me and furnished it with all the gadgets I needed. I always accompanied him anytime he was travelling out of the country.

Then I got pregnant and at my age I said what the hell I will keep it. Here was a man who cared so much for me and I was fond of him too. I think I even loved him after a fashion. I later saw the soldier in him. He told me callously to get rid of the pregnancy as if it was just a troublesome pimple. He tossed N100,000 on the bed and walked out. That day I wept than I had never done in my life.

Three days later he came again and when I told him I had not done the abortion, he was furious and warned me not to play with fire, that if I thought he was in the habit of having bastards all over town, I was mistaken. I begged him and swore that I will never tamper with his marriage, that I was old enough to take care of the child.

When he did not bulge, I became stubborn and told him my mind was made up. He looked at me on 'kin' and told me there are ways to unmaking made up minds and left.

“If only I had known what he meant, I would have run for my dear life.

Two days later two hefty men forced their way inside my house accompanied by a third who was better dressed.

The thugs held me down while the well dressed gentleman gave me injection. That was the last thing I knew. By the time I woke up the following morning in my apartment, I did not need to be told that I was no longer pregnant. I guessed that the third guy was a doctor and he performed the D and C while I was knocked out.

He must be good because I did not feel any pain or bleed too much.

But my car was gone, so was all the furniture, every little bit including my gas cooker that the colonel bought for me.

A week later the landlord gave me an ejection notice and here am I out of my ass in the cold.

What a terrible experience, I can hear you mutter. But you see, we women should be ready to squander money their girl friends and even talk about second wives but that's all there is to it.

They are used to the solidness and security which their marriages and families provide so much that they will never let the affair go beyond affairs.

Single girls had better not take anything for granted because some marriages are simply too solid to be abandoned.