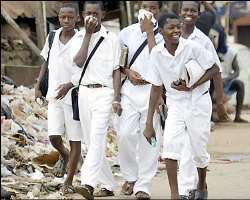 Picture by BBC
Listen to article

The Lagos State Government is to begin the arrest of school-age children found roaming the streets of the metropolis during school hours.

This was made known in a release signed by Mr. Opeyemi Bamidele, the Commissioner for Information and Strategy.

Bamidele stated that the exercise was in keeping with the commitment of the state government to implement the Child Right Act and reduce the incidence of child abuse in the state.

To ensure that the exercise was successful, the Commissioner stated that the State Governor, Mr. Babatunde Raji Fashola, (SAN) has approved the procurement of four new buses and recruitment of 50 ad-hoc staff, to assist in sensitising Lagosians before the commencement of the exercise.

He added that the Ministry of Women Affairs and Poverty Alleviation, which is in charge of the project, would soon commence the distribution of yellow card, which contains relevant information on child abuse while the first phase of the exercise would last for 60 days.

According to the commissioner, “with the government policy on free education, there is no excuse for any child of school age to loiter or hawk on the streets of the metropolis, when his peers are in school.

“The nature of Lagos State, as the nation's melting point, where everybody wants to work, is throwing up myriad of social challenges and the state government is concerned about the issue of Child Right Act and child abuse.”

Bamidele stressed that the government's social welfare department is entrusted with the issue of child abuse and cannot therefore, as a responsible government, folds its arm.

He pointed out that the state's social welfare institutions, such as Boys and Girls Schools, Girls and Boys Remand Homes and Children Transit Homes, have a lot of child abuse cases and most of them are receiving government's attention.

“If a particular parent would choose not to be responsible, government would not hesitate to take such abused children from such parents into its custody.

“The issue of child abuse is one that calls for our collective efforts and commitment to drastically reduce it. Our children cannot report their situation to government. It is neighbours and teachers who can help identify these children, and that is the reason why we as government are ready to investigate volunteered information,” Bamidele said.