How I combine Xtianity with Nollywood-----Desmond Arinze 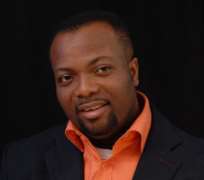 The name Arinze Desmond Okonkwo may not readily ring a bell like Emeka Ike or Desmond Elliot would. But his face, nevertheless, is a very familiar one. Even if you are not a Nollywood movies freak, you are likely to have run into his still image at one point or the other with his face selling one product or another.

While he's not doing badly in the modeling business, he has also managed to carve a niche for himself in Nollywood.
However, unlike many of his Nollywood compatriots, Arinze also rocks the mic as a praise worship leader in his church, The Fountain of Life Church, Lagos.

http://nollywoodgists.com recently caught up with this dude of many parts, who also owns a boutique on high-brow Hope, and he shared what it's like, being in Nollywood and 'Christianhood.'

Born and raised in Lagos

I had my primary education in Lagos, secondary education was in Enugu and first degree at the Obafemi Awolowo University. I read Economics and did my MBA at the University of Lagos. I'm in my early thirties. I worship at the Fountain of Life Church.

Why not banking or some other big-fat paycheck jobs

For me, I've always known what I wanted in my life. I've always known I'm not cut out for the 9 to 5 office life.
I started modeling about 17, years ago. It started with a friend who saw me during a photo shoot in a studio, he said he liked my height and composure, and asked if I was interested in modeling. And I asked why not? He then introduced me to Modela who became my agent and he gave me so many jobs. From there I started getting jobs on my own.

Again it was during this period that a marketer saw me. Then I was shooting a Maltina commercial that entailed acting. Then he said he would like to give me a role, and invited me to his office. I started home video in 1995, but before then, my cousin in the industry, Dolly Nwachukwu had been asking me to come and try my hands in acting. Then she took me to NEC, producers of Glamour Girls, there I got a role as an extra. That was my second movie; the first one was Deadly Affairs with Opa Williams.
It was from there that I went back to school, and I came back fully in 2004.

As a praise worship leader and Nollywood artiste, how do you still hold your own?

As for me, I am an agent of change, I don't do things everybody does, I do things for myself. A lot of people have asked me, how I cope being a Christian and being in movies. And I always let people understand that I was a Christian before I went to Nollywood. I gave my life 1988/89, and I've been singing in church. That's what I do for God, my own little contribution.

Oftentimes people say people in Nollywood don't go to church, but that's not true. Actors and actresses go to church, maybe they are not just prominent, they go in to worship and go out, which I don't think is bad. But for me, I've been working for God before I went into Nollywood and even before I did, I had to seek my pastor's consent. And he told me I should go there and shine, since I'm the light of the world. I went there and I've been enjoying it so far. There's no known face I've not worked with and I love all of them. They are people I look up to and learn from. They are all wonderful people.

How do you distance yourself from the 'life' in Nollywood like hanging out at Ojez?

Let me ask you, what is wrong with going to Ojez? I go to Ojez, there is nothing wrong in going to Ojez. It's a place where people, mainly actors, come to sit together. At Ojez, actors come there; they talk and meet with one another. It's not necessarily that I go there to drink beer; I can go there and just take malt drink or water. I would say that what is important is one's heart. Church is not a building, not the chairs, but you and I.

With your good looks, fame and probably fortune, how do you cope with female attention?

I always ask this question, why did God make man, and then He made a woman? There is something, a connection. How would this world look like if it were only men|? It would be boring, I wouldn't even like it. A lot of people (especially women) see me and they admire me, and I shouldn't be rude to them.

I admire women, God made them so, it's a good thing they are there, my mother is a woman and I have sisters, so why should I say I don't like women, I love women!

How do you cope with those that want to take the handshake beyond the elbow?

Is she a Christian?

Yes, she worships in one of the Redeemed churches.

So when is the wedding bell going to toll?

Very soon, and you'll hear it.