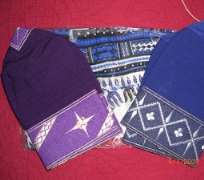 Aso-Oke is the short form of Aso Ilu Oke also known as Aso-Ofi, meaning cloth from the up-country. This fibre is woven from traditional materials in Yorubaland, the second largest tribe in Nigeria. Cloth weaving (Aso-Oke) started centuries ago amongst the Yorubas but predominantly amongst the Iseyin's (Oyo State), Ede (Osun State) and Okene (Kogi state). These fibres used for weaving are said to be locally sourced or brought from neighboring states.

However, popular types of Aso-Oke are the “Sanyan” (beige with white stripes) and the “Alaari” (red). Other relatives of Aso-Oke are Kente, the Ghanaian genre and Akerete, for the Igbo/Calabar women. Moreover, Aso-Oke is now regarded as popular attire that is considered trendy in different countries and world regions like Europe, United State, Brazil and Cuba.This fibre is known to be more expensive than ordinary cotton materials because of the cost of input and the techniques involved. That is, Aso-Oke involves a whole lot of preparation, such as planting of cotton, spinning, sorting, patterning and weaving.

Firstly, the planting of cotton stage prepares the cottons for usage in making the threads usable for weaving Aso-Oke. It is mostly planted during the rainy seasons between the month of June and July. Spinning is the process of separating the cotton seed from the wool, and in doing this, a bow-line instrument called spindle and “Orun” in Yoruba language is used. Still on the preparation, Sorting is the process whereby the weaver separates the dirt from the wool in order to make the wool fit for use since the cotton often acts like a magnet. In other words, it easily attracts dirt.

While the patterning stage is the process of putting designs and patterns on the Aso-Oke, weaving is the last stage. This is where the rolled cotton is neatly inserted into the striker through the extenders. Finally, the material is now fit, ready to be worn for occasions such as coronations, festivals, engagements, weddings, naming ceremonies, burials and other important events. The beauty of the woven cloth (Aso-Oke) is showcased when it is used as Aso-Ebi (a group of people e.g. friends, families etc dressed alike).