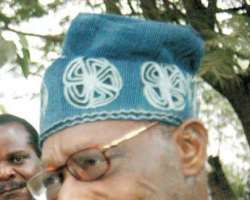 •Angered by question on graft

Former President Olusegun Obasanjo yesterday in London, flared up during an interview session with the British Broadcasting Corporation (BBC).

The interview session on Hard-talk, saw Obasanjo losing his cool when he was asked questions on corruption under his administration as President.

Feeling embarrassed with questions about his daughter, Senator Iyabo Obasanjo-Bello's involvement in an alleged corrupt act, Obasanjo said he did not like the reference to his family, adding that the senator was old enough to speak for herself: "You have made serious allegations against me and my family, substantiate them," he said.

Part of the encounter is reproduced below:

BBC: One senior official inside your Federal Government has been convicted of corruption?

BBC: Your own daughter…

What happened to my eldest daughter?

BBC: She is still being investigated by the anti-corruption watchdog.

Do you feel for her?

Why should I? She is old enough. She is a woman of 42 years. Will you accept responsibility for your son at the age of 21 for what ever reason? Now don't ask me that type of question. I find it very insulting with all due respect. Can you ask that type of question to an European leader? That is an allegation and anything can be alleged. You can be alleged to be a lair."

On President Umaru Musa Yar'Adua's alleged comments that corruption was pervasive under the erstwhile administration, Obasanjo said he did his best to fight corruption during his time.

Assessing the performance of Yar'Adua so far, Obasanjo quipped: "I don't want to comment on him. It is too soon". He however stressed that Yar'Adua is a good man. "From what I know of him till now, he is a good person," pointing out however that "that does not make you a successful and good president. You need much more than that."

Reminded of ongoing trial of US oil firm, Halliburton for corrupt practices and bribery, Obasanjo asked his interviewer: "Did they say they bribed me?"

Informed that a Halliburton agent, Tesler, had named him among three Nigerian leaders whose palms where allegedly greased by the oil firm, Obasanjo said: "Tesler will never say that." He however said though he will not take responsibility for corrupt acts of those who worked with him, he was ready to answer to charges of corruption once the evidence was produced.

Speaking earlier on the international arrest warrant on the Sudanese leader, Omar al-Bashir, Obasanjo distanced himself from the International Criminal Court (ICC) saying he is not sure their action is not political.

He agreed to having signed the ICC protocol but clarified that he did so as Nigeria's President believing that the court would be fair and non-political; regretting however that "today, I m not sure how non-political the ICC is."