Moulding her into the woman you want 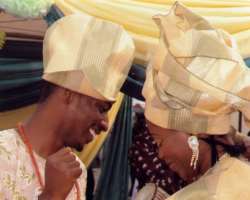 IT is an in thing today to see men have extra-marital affairs. Any man who doesn't get involved in this craze is considered not sociable or probably from the stone age, as they claim that the good ones engage in it by mistake.

Let's think about it, do we say it's lust that drives men into this or rather, a yearn for a taste of better women, incontentment, dissatisfaction? At least, different foods have different taste, so also women, as far as there are many women out there-who are willing to lie down for men - the Creator has given men permission to choose as they wish!

When the opinions of some men were sought on why they have extra-marital affairs, some plainly said that their wives are meant to be what they are: wives and that,it's normal for them to seek comfort in another woman's laps because “most things you can't do with your wife at home, those girls out there are ready to do them with you. There are various sexual positions and styles that are only appropriate for the ladies outside that are not proper for your wife. Asked why this is so, the answer is, no concrete reason whatsoever. She is the wife, that's all, the mother of my children” meaning that men care less about their wives, they are just factories for producing children. Some men even think their wives are no longer romantic after giving birth to one or two children.

“I hate the way my wife cooks. She doesen't know how to cook, but my girlfriend's cooking is superb, why not? Does your wife get half of what you squander on your girlfriend? If she does, she will cook a better soup.

There are so many reasons men give for seeking satisfaction outside home, food, sex, cleanliness, comfort and peace of mind, but the question is, can't they mould their wives into the kind of woman they want? The kind they seek outside? Some men have not realised that their wives can fit into the picture of that woman outside and some, because of social pressure from friends, can never change.

When they go out with their friends with the bottles on the table, a woman must be somewhere waiting to complete the scenario, what a scam? Have you asked why your wife cannot fit into the picture of your girlfriend? Is she not a woman with the necessary qualities. She is too fat probably, too complacent, she can't cook well, maybe, she can't give you the sexual styles you want? So the solution is sought elsewhere outside; another woman gets involved which may compound all the problem. This is why some men end up marrying more than one wife, or having chains of girlfriends, to derive satisfaction which they can never get.

Everything you seek in a woman you can get in your wife if only you are prepared to do it, to mould her into the kind of woman you want. These few tips will help you.

•Teach her the sexual styles you want if you are so obsessed with different sex styles or do you prefer her to learn from other men? I am sure you'll be jealous.

•Give her enough money to cook. As said earlier, if you can give your wife much money as you lavish on your girlfriends she will cook that favourite dish of yours.

•Buy her recipes of special delicacies. Make her know what you like to eat and how to cook it.

•Emphasise on cleanliness and if she sees your seriousness, she will adjust.

Involvement in extra-marital affairs can shatter your marriage and can leave your woman in an emotional distress. It's unfair to do to others what you don't want them to do to you. Would you want your wife to seek solution elsewhere (probably with another man) if she finds you not satisfying? Then mould her into the woman you want.