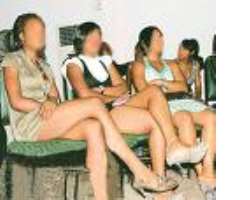 Eleven suspects accused of forcing 150 young Nigerian girls into prostitution in Europe after helping them to enter The Netherlands as asylum seekers went on trial in a Dutch court on Monday.

The Agency France Presse also reported that the prosecution spokesman, Wim de Briun stated that, “The 11 suspects, mainly of Nigerian nationality, will have to answer to charges of human trafficking and being members of a criminal organisation.”

Briun added that 140 and 150 young Nigerian girls disappeared from juvenile asylum centres in The Netherlands in 2006 and 2007.

He said, “We managed to find about a dozen of them, but we believe that all of the girls were forced into prostitution, mainly in Italy, but also in Spain and France.”

According to a media statement from the prosecution service, The Netherlands served as a transit point for the girls, sent by the suspects from Nigeria with false identity papers and instructions for an asylum application.

It said, “They used voodoo to influence the girls. They had to give blood, nails or a a piece of clothing and make a promise before a voodoo priest ... to repay the debt incurred for their trip to Europe.”

Bruin also said that some of the girls investigators managed to trace agreed to testify against the traffickers ”with the help of a Nigerian priest who helped them get over their fear for the voodoo curse.”

The suspects were said to have been arrested in The Netherlands in October 2007 after an investigation by Dutch police in collaboration with their Nigerian, Italian, Spanish, French, Belgian, British, Irish and US counterparts.

PARLIAMENTARIANS OVER TO YOU