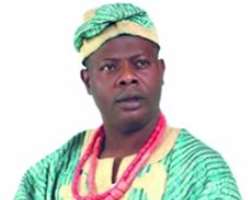 Star Actor, Yinka Quadri is 50. He would actually hit the golden age in the month of September. Resourceful, rated high and rewarded, the man listed as one of those that toiled to make the movie industry- the Yoruba sector- what it is today, is so excited to be on the verge of 50. Sola Onamodu spoke with him.

Hear him in a chat during the week:' I am so happy. I thank God for my life, where I am and all that happened to me. I believe if you can think, you will know how to thank God.

Best birthday gift
The best birthday gift I can ever give myself is, by the grace of God, to move into my personal house, which I am grateful to the Lord that He has almost done for me, and acquire a brand new car. I pray that when I move into the house, my blessings will continue to increase in multiple folds. I cannot conveniently say this is the best birthday gift I ever received. All I can say is that at every point in time, the gifts have always surpassed one another, and, I am one that believes whether small or big, gifts carry equal weight. It is the act of giving that matters- so, I always appreciate such gesture and cannot really say this particular one surpassed the other.

New frontier
The thing about this world is that you are never satisfied with all that you have. I know that if a countdown of the most successful individuals is made in this Yoruba movie industry, I will be among the top five. That is the truth and I thank God for it. But in spite of this, I still want to better my lot- I just want to do things that will improve my craft because it has given me a lot and I don't have any regret doing what I do. No regret at all.

Secret of my success
I have actually researched that particular question myself. I did a self- assessment and spoke with fans and critics and realised it has to do with my background. I was born in 1969 in School Lagos Island, September- I attended St. Patrick Catholic School, Idumagbo for my primary education- and went on to Christ High School Ebute Elefun. When I got to class three, I had to drop out of school. This was not due to poverty. Agreed I came from a polygamous family, my father had 22 children. I was the eleventh child but my father was a rich man.

He was very rich. It so happened that he had a cousin of mine who was an apprentice with him- and he came to really trust this cousin so much that he put him in charge of all his businesses, and when the apprenticeship period was up, he had to release the man because there was no one he trusted to run it. For whatever reasons he had, he didn't want my other brothers to take over. Out of childish ignorance, I opted out of school to learn the ropes and take over the business so he could release the apprentice- because at that point in time, my father's refusal to let him go had become a family issue.

After I took over the businesses, he was so impressed with my performance that from 1977 till he died in 1994, he was always praying that I would always be successful in all that I do. So, I believe that those prayers from my father and mother- also of blessed memory- coupled with my passion for the trade helped sustain me, brought me to where I am today. And, I thank God that though of all my father's 22 children, I am the least educated- but there is nothing they want to do in that family that can hold without my support.

Cutting down on location session
Yes, nobody loves to stress himself unduly. Going to locations is especially strenuous, especially when you are shooting in the bush. And, I doubt if there is anybody who is looking forward to undergoing such stress till he ages. My prayer is that, though not at 50,very soon a time will come when I will be acting as special guest on set- and transform into a big time producer, because I believe there is no age limit and limited stress to being a producer.

Passion for acting
Before I went into acting, I was controlling my father's business and this was an enterprise that was worth about ten million naira as at 1984 or thereabouts. So, I went into acting for the passion. My father kicked against it because I was combining it with managing his business. He didn't let me be until I found a capable hand to replace me. But he later began supporting me when he realized I derive great joy acting.

Joint celebration with Taiwo Hassan
I believe it is a good thing. It is the will of God. We have not really sat down to talk about celebrating the day together the same day, mine's September, his October.

Sacrifice
You know if you are engaged in something for the love of it, there is nothing you won't do to perfect it. Fortunately for me, when I started with little gains in the trade, I was able to get money to fund my passion from another source. I remember in 1986, I sold a 504 car to produce a movie Ojiji with Prince Jide Kosoko. Then there was no home video. We were doing optical film and reversal. Jide Kosoko owned the script, I sponsored it. I did that because primarily I wanted to produce a movie- not necessarily for the gains. I expended over a hundred thousand naira on that production. In 1992, 1 sold a whole house to produce another movie Oloruka- this was when home video came. But because my family were well to do, I didn't really feel the economic constraints as such and I thank God today I am one of those reaping from the industry.

Common mistakes in the industry
Young artistes are too much in haste to become stars. They want to make quick money and they forget that all those stars they see have toiled for years as ordinary persons before attaining their present status. Fine, there are few exceptions when fate come to play. But in most cases, it is the result of years of hard work and interest in the job. Most of the present day actors don't want to toil before they reap. Then there is also the case of those that can't manage success. They attain a minimal state of recognition and before you know it, it gets into their heads and with their over- bloated ego; start to misbehave and the little they have achieved fizzle away. The biggest mistake is that most of them forget that it is not all that glitters that is gold.

Scandal-free life
I avoid the mistakes of the younger actors. I don't believe I am that good an actor as people make out. When someone keeps telling me you are such a good actor, you are this and that, I become wary of such person because I tend to believe it. It is either you are being flattered- or your ego is being massaged unduly. And, when I realize that the comments were made with genuine intention, and then I become afraid because it means I have to better that performance the next time. Because it is not being the top man that matters- but sustaining that position. Staying away from scandal has to do with being cautious with the people you relate with, where you are found and things like that.

My children
I made it a decree that whatever any of them want to be- education first. That is very paramount. I thank God there is one studying Theatre Arts and another about to begin Cinematography in the United Kingdom. Whatever career they want to pursue, they are free but the condition is that they must attain an appreciable level of educational qualification.

I have stopped making babies. My first-born got married recently and I pray all the others will go on to achieve far greater things than I have done.