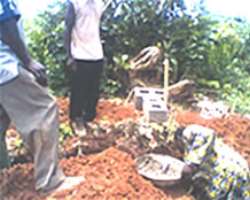 A site of a house foundation being laid.
Listen to article

THE family is sacred, and blood, one expects should be thicker than wa-ter. But nowadays, it seems for some, the family is no longer sacred.

Cases of insincerity abound. Family members are no longer holding the bond that binds them together. Everyone goes his own way. And to say the worst, family members even dupe one another.

But, since when did it become acceptable to dupe a family member? How did this practice become so common and why? Stories of family members using the money sent by their siblings for investment purposes to build lavish houses are far too common.

Many readers would have, of course, heard stories of others taking money from relatives who live abroad and instead of using that money on an assigned task, they usurp it for their own private use.

Now, this behaviour is not limited to Nigerians. That would be absurd, especially since history has proven that merely sharing DNA is not enough to prevent bad people from doing bad things to their relatives.

Nevertheless, how do we quell this growing trend before it becomes uncontrollable? Or, is this issue one that is already beyond the point of return?

Now, if you still do not believe, read this story:

Please, I prefer to be anonymous. I will hide some of my information for reasons best known to me.

I was born some years ago into a family of five children. My siblings and I had an interesting childhood. Our parents, though devoted, were not educated. They made sure we got to the peak of our professions and careers. They sponsored us and brought us up in the fear of God.

Growing up was fun, and everyone around saw us as privileged. My mates, especially when I was in secondary school, were fond of me. In fact, I was one of the best students in my school in my secondary school days.

I got admission to study in Obafemi Awolowo University (OAU), Ile-Ife. In fact, I got admitted for Medicine and Surgery. It was hectic but I passed all my examinations. I spent more than eight years studying a six-year course, you know OAU with Aluta then.

After my induction, I began my housemanship at Obafemi Awolowo University Teaching Hospital (OAUTH) I was lucky, you will say. The challenges were enormous but I was resolute. The days were over and I prepared for the National Youth Service Corp (NYSC). I was posted to the far North, Borno State. My place of primary assignment was a general hospital in town, but it was not that challenging.

After I finished, I was dreaming academic. I wanted to go back to school. This was the beginning of my dream to study abroad. I got admission here in the United States (sorry, I won't mention my school now for some reasons). I got on well and I was able to get a medical job in one of the hospitals here.

Life was becoming more interesting. At least, I was getting excited and life with some of the things it brings to me. I got married to my spouse, after almost nine years of courtship, she tried, you will say. And we live happily here in the States.

Later, I was convinced by my wife to start preparing to go home, that is to come back to Naija. I had thought about it before, but I normally waved it off. The question is, what will I do and where do I live in Naija. I thought of building a good structure as hospital and then, build a living apartment. I know this will make living bearable, especially with my status – a gynaecologist.

I told my wife about my ambition and together, we called my brother, my immediate elder brother, to help me out. He promised to look for good locations where I could build my hospital and my house. I was rest assured there can be no problem, at least, my brother cannot dupe me. But I was wrong!

The next time I called him, he had been able to secure an acre of land for me in a remote location, but I told him the hospital will not thrive at such place. He promised to look elsewhere and sure he did. He got two plots of land in an area for N1 million and I sent the money to him.

My brother got the architectural design of the house for me but I sent that of the hospital to him. He told me he would engage the services of contractors to help in the buildng works. I thought I was the luckiest person on earth, at least, my money is safe in the hands of my egbon, I thought.

Later, I became curious, my brother was avoiding me. Phone calls were not picked and messages were not replied. I was becoming confused. The genesis of this was when I told him I would be coming home to have an overview of what my brother had allegedly been doing to keep the project ongoing. But I was not deterred, I stuck to my decision to come back to Naija.

It was winter here and I decided to come to Naija to have a fill of African sun. I came around December, hoping to celebrate Christmas and the New Year with my family here in Nigeria. I came alongside my wife and two children, and it was a heroic welcome for me. But I noticed something as soon as I arrived, my elder brother was not present to welcome me!

I told everything to my parents and they were shocked. Why? My brother had not been giving them what I sent home as allowances to them. Also, my brother recently relocated to his new-built house!

I made straight for his house and when we got there, he couldn't express himself. He said he had spent all the money I had been sending to build the two four-bedroom flats. Imagine! Where is the land you allegedly bought for my hospital? He said he had not bought any.

Now, I left Nigeria back for my base with tattered hopes and dreams. I was not happy. I could not institute a court case against this fraudster, at least, for the fact that he is my brother. I felt so embarrassed. My friends who were jealous of me, when they heard about what happened to me, felt bad.

To make matters worse, my wife slapped my brother, an insult! No one could blame the woman. She was the one who even recommended that my brother should supervise the building.

This is my story!