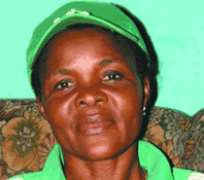 Super Falcons' Chief Coach, Uche Eucharia's, days with the women national team may be numbered as the Nigeria Football Federation (NFF) is now contemplating shopping for her replacement.

The move by the occupants of the Abuja Glass House was the outcome of the Super Falcons last weekend's London 2012 Olympic qualifiers game against the Indomitable Lioness of Cameroon, which ended 2-1 in favour of Nigeria.

Daily Sunsports was reliably informed that the NFF executive is disenchanted with the performance of the African Champions in the encounter, which it was expected to win with a wide goal margin.

According to the source, the Nigeria versus Cameroon match once again brought to the fore the technical deficiencies of Coach Uche and her technical crew, who were bereft of tactical ideas on how to change the game plan that has resulted in the Super Falcons being boxed into a tight corner for the second leg encounter billed for Cameroon.

It was gathered that the NFF officials and some members of the technical committee were visibly shaken by the unimpressive performance put up by the players during the match and right there at the National Stadium, Abuja started making inquires of possible replacement for the ex- Falcons player.

They expressed worries that it was the same trend in which Falcons lost out to Ghana in the race for the All Africa Games.

Coach Eucharia and her German counterpart, Thomas Obliers, Daily Sunsports was told would be allowed to see off the Olympic qualifiers but would not take the team to London if eventually Super Falcons manage to qualify for the games.

Meanwhile coaches Effiom Ntiero Effiom and US-based Falcons' former handler, Sam Okpodu, were the names being touted by the NFF officials as the coaches who might take over the team from Eucharia.

It would be recalled that for the first time, Nigeria would not participate in the women football event at the Mozambique All Africa Games.

The Black Queens of Ghana knocked Falcons out of the Games.