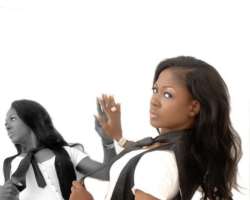 In recognition of her professional excellence and contribution towards the growth of the Nigerian motion picture industry, actress Susan Peters has been nominated for two different awards at the forthcoming Nollywood and African Film Critics Awards, holding in North Carolina.

Susan is nominated for Best Supporting Actress for her role as the troublesome 'Ibiere' in the movie, 'Bursting Out' and the Best Actress People Choice Award. The NAFCA award ceremony is billed to hold in Durham, North Carolina on Saturday, September 17. She will be slugging it out with other African actresses who have also been nominated for the same award in recognition of their movie roles.

In this category are the likes of Ini Edo (for 'Inale'), Susan Peters (for 'Bursting Out'), Roseline Ngissah (for 'Somewhere in Africa') and Nadia Buari (for 'Checkmate'). What will also excite movie buffs are the stars that have received nominations for the award of Best Actress in Leading Role. The actresses that will vie for the plaque in this category are; Nse Ikpe-Etim (for 'Mr. and Mrs.'), Genevieve Nnaji (for 'Sacred Lies'), Omotola Jalade-Ekeinde (for 'Hamza'), Caroline Chikezie ('Inale') ,Angela Okorie (for 'Holy Serpent') and Ufuoma Ejenobor (Private Storm) .

NAFCA is instituted in North Carolina, USA, to review and recognise excellence in professionals in the African film industry. Just recently, the organisers of the awards, which will be held annually, released a list of nominations for the maiden edition.