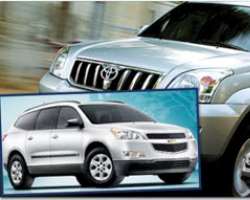 The decision by the Nigeria Police Force to enforce the ban on the use of vehicles with locally installed tinted glass is causing a rift between car dealers and some vehicle owners.

Many new Toyota Prado users have protested to some car dealers for allegedly selling to them vehicles with artificial tinted glass instead of the factory-fitted type.

They claimed that they were being harassed by the police for using unauthorised tinted glass vehicles, a situation they described as embarrassing.

The Law prohibiting the use of tinted glass on vehicles was enacted in 1991.

It forbids anybody, including top government functionaries, from using 'any glass fitted on a motor vehicle to be tinted or shaded or coloured lightly or thickly; or darkened; or treated in any other way… so that the persons or objects in the motor vehicle are rendered invisible.'

According to nigeriaeliteforum.com, the law was not enforced then because the country was under the military rule. Many military officers, with their friends, were using vehicles fitted with tinted glasses.

It noted that the Inspector General of Police was also given the authority to use its discretion to approve application for the use of tinted glasses by members of the public.

But as armed robbers and hired assassins were increasingly using tinted glass vehicles and covered number plates to rob and escape arrest, the police said early in the year that they would begin the enforcement of the Act as from march 21, 2001.

Only vehicles with factory-installed tinted glass were exempted from the ban.

As the police began the clampdown on violators, owners of vehicles with locally fixed tinted glass had hurriedly removed the 'artificial coating'.

But those in love with the special feature, who could afford the price of new vehicles with factory-fitted tinted glass, ordered for them.

One of such people is Chief Segun Philips of Peacock Travels and Tours Limited. He claimed to have bought a Toyota Prado XP equipped with a sun-roof and factory-fitted tinted glass at N8.5m.

He said he was surprised when the police stopped him on July 15, 2011 along Awolowo Road, Ikeja, Lagos and insisted the tinted glass of his SUV was not factory-fitted.

The police, he said, used their fingers to rip off part of the tint to prove that it was artificial.

Phillips, in a protest letter addressed to the seller of the car, through his lawyer, Mr. Shola Animashaun, demanded 'the replacement of the said Toyota Prado XP jeep with the one that has factory fitted glass or a refund' of his money.

Although the letter, dated July 19, 2011, showed that the auto dealer had 14 days to respond or risked a legal action, there was no evidence that the firm had acted upon it.

Philips is not the only complainant
As the police intensify the enforcement of the tinted glass ban, many owners of the new Four Wheel Drive vehicles have reportedly continued to receive a raw deal from the law enforcement agents.

Disturbed by the persistent harassment and embarrassment, the vehicle owners were said to have mounted pressure on the car dealers to do something about it.

The managing director of an auto company dealing in Toyota products confirmed this on Tuesday in a telephone interview with our correspondent.

He insisted the tinted glass was factory-fitted, adding that it was one of the two types installed by the manufacturer to the vehicle.

He said, 'We have two types of tinted glass installed to the vehicle from the factory. One looks permanently glued to the glass, the other appears detachable, but it is different from the local or artificial one. This may not be known to the police who are harassing the vehicle owners.'

He said the matter was being resolved internally.
Meanwhile, the car dealer said that his company had resolved to remove the attached tint from the glasses of their customers' vehicles 'at no cost to the owners of the vehicles.'

He also said some of the affected people had agreed to the new arrangement.

But some customers insisted they were short-changed and demanded a refund of part of the money for the vehicles.

The Head, Marketing, Toyota Nigeria Limited, Mr. Andrew Ajuyah, said the tint on the glass of the Prado was factory-fitted.

Ajuyah, who spoke on the telephone with our correspondent on Tuesday, also corroborated the explanation earlier provided by the Toyota dealer, stressing that there were two types of the factory-coated tint.

According to him, while there is no issue with the tint fixed in between the glass, the other, which comes with film fixed on the glass, may raise suspicion among the police.

He said Toyota dealers were already advising their customers to bring their Prado to remove the tint in order to avoid intermittent harassment and clash with the police.

We appeal to them to take the vehicles to the dealer to do it for them free. But if they don't want, that means they have to be settling the police from time to time,' he said.

Ajuyah also said that the TNL henceforth would bring in Prado with tint fixed in between the glass, 'which will be lighter and not as dark as the one currently in circulation.'

Meanwhile some concerned people have condemned the attitude of some police for allegedly extorting motorists in the name of enforcing the Motor Vehicle Prohibition of Tinted Glass Act.

For instance, one Joy Rider, whose comment was sent through the punchontheweb.com, said it was unfortunate that some policemen were turning a well and good intentioned law into an avenue of extortion and harassment. 'Very soon, they will start shooting people for not 'settling' for having a tinted glass vehicle,' she said.

The tilted glass issue, according to another commentator, who identified himself as Gasky Truth, is a way for inept police to intimidate, harass and extort Nigerians.

He said, even though the IGP had exempted vehicles with factory installed tilted glass from the ban, many police could hardly distinguish between factory fitted and non-factory fitted type.