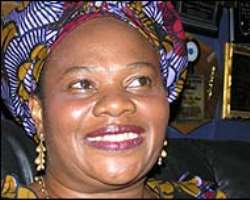 Former Minister for Information, Dora Akunyili is surfing her way back to the top of public discourse.

She is attaining this feat on the platform of a grave allegation.

Informants alleged that the personal house the former minister is currently putting finishing touches to in Agulu, Anambra state is located

on a portion of the land the community gave to National agency, NAFDAC (National Agency For Food, Drug Administration Control)

The 'gift' was reportedly influenced and made during the tenure of Akunyili as Director General of the agency.

Information pieced together alleged that Akunyili had cornered a portion of the expanse land as the gains of her effort.
The country home, valued at one hundred and Fifty million naira, is said to share a fence with NAFDAC office, Anambra state.

Informants revealed that news of this development floating around has started causing an agitation of sort within and outside official quarters.

Presently sources alleged a movement to correct the alleged anomaly is on.

The growing agitation is said to have the subtle support of current head of NAFDAC, Paul Orhii.

Orhii is said to maintain a low profile in the matter based on his ongoing battle to retain his seat-he fears Dora still has enough clout in government circles to compound his problem if he takes her headlong.

The positioning of Akunyili's home gives her vantage view of going ons within the NAFDAC compound- a situation many have described as 'unsettling' given her pedigree at the agency.

Akunyili had used the agency- her performance there- as a spring board for her political ambition.

The former minister and defeated senatorial aspirant refused to respond to enquiries on the matter when contacted.