HOW TO CONTAIN THE BOKO HARAM MENACE, BY NAVY CAPT OGBONNA 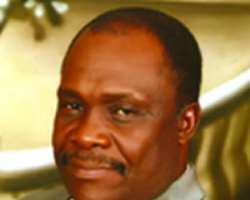 The Boko Haram saga
As far as I am concerned, the Boko Haram issue is a mere  storm in a tea cup because people believe that this Boko Haram issue is going to cause the disintegration of Nigeria. If you look back, you will remember the Maitasine issue. That too was a sect we also had in this country, and General Buhari and Babangida were able to peep into that and that was the end of that issue.

So, I think Boko Haram, is a fall- out of the agitation of those Northern states that advocated for Sharia. We thought that the Boko Haram people, because they say they don't want western education, were really illiterates but we can see that they are not illiterates. It is an ideological war that they are fighting and l think it will come to an end as soon as the security services are able to apply themselves to it and from our own knowledge, they are applying themselves to it.

Creating traffic jam and stopping people from moving and going about their duties is not a way to fight terrorism. I think terrorism is better fought by state security services being empowered to do their job. Following the bombing in the United States, which has been going on since the 9/11 attacks, the terrorists have been making efforts but they have always been caught by the security services.

lt is not work for the army, neither is it the work of the navy nor the airforce because they are not equipped to fight such wars.

I think it's a war for the SSS (State Security Service). The SSS would do better fighting this war and be able to get those boys who are involved. In fact, this war should be fought without the citizens knowing about it, especially in a democracy like ours. This war should be fought without any reference to the innocent civilians, who are going about doing their duties. But now that the army has made itself known, how do you think they will capture these boys by being on the streets in the traffic, preventing people from coming to work.

That doesn't solve the war. There have been so many attempts, right after the bombings in U.S. Nobody gets to know about them because the people are always arrested promptly by the security services. Now, l think that it is time for the National Security Adviser (NSA) to go back to the drawing board and find solution to this.

Measures used during the Maitasine menace
Of course, if you also remember the Maitasine issue, the way the government took care of that was never noticed by me you and. Despite the fact it was a military regime, nobody really knew how they were taken care of. The military intelligence people were the ones that suppressed the Maitasine uprising instead of using the ordinary soldier on the street. They never used anybody. You never really knew that the war was going on. In fact, government was able to bring down Maitasine, using purely intelligence, and that's how they got them. I saw them, they all had marks on their body.

l am sure, if you  remember, none of us was disturbed on the streets or in traffic because they were looking for Maitasine. With proper intelligence they will combat it. So, making the fight now visible as the army is doing, is not the solution to it. I think that if the army intelligence work with the SSS, airforce and navy intelligence, they will have the capacity, to solve this problem, rather than making it so visible and disturbing people on the streets. The army has no reason to stop people on the streets because they are fighting Boko Haram. No. That is not a solution to it. That is my own opinion and I think it will be the view of other people, who understand what I am saying.

You can not be doing Sharia and at the same time you are stealing money. You are not educating the people, you are not providing any thing for your people.  So these boys are asking for purity. If you want to apply Sharia, apply it properly since you asked for it. Boko Haram is a fallout or the   fulfilment of a  prophecy. Sharia is an Ideological issue within the community; who is afraid of Sharia? Sharia is also made in such a way that if you are a Christian and you live in a Sharia state, you are free to go through the normal legal system and the Sharia system and still live your life.

But what we are saying is,  this is the problem, we are not saying that Boko Haram is right in what they are doing. Nobody has the right to take the lives of other people because of their ideology. It is left for the people, it is left for the various states that have adopted the Sharia to practice it strictly. Look at children on the streets in the North, who have no future, the Almajiris, take care of them, don't take their money.

Do it based on how God said you should do it. They are not doing that. Some people take other people's money, go to Dubai, Saudi Arabia, buy houses there, is it not their fellow men who made Saudi Arabia what it is? Is it not their fellow Muslims who have made Dubai what it is? So, why would they carry their money and go to Dubai to buy houses while their own place is in total depletion and poverty.

Other causes of Boko Haram
We are living in a society where justice should prevail, we are living in a society where things should be done properly and that is what democracy is all about.Whether democracy is practised within the Muslim system or within the Christian system, within the western education or not, there should be justice. We must make sure that people are not unduly oppressed by keeping them hungry. You oppress people by taking their money; so, that is what is happening here.

Those boys, the Boko Haram people, are not illiterates. They have a lot of educated ones among them. They cannot get a job. Everything surrounding it is people's personal aggrandisement. They take people's money, belonging to the society, which they are supposed to use in addressing the poverty in the land, they take it to build houses in South Africa, in Dubai. So, this is the consequence of this act. There are so many other militia groups in the country that I know and am confident  that their actions cannot destroy this country, neither will it destroy the unity of this country. But the issue of justice, people must begin to look at how to address the issue of justice. You don't elect people then after the election, you now back down and continue to what they were doing.

This is happening in my village anyway. After this election, all the issues that they raised, has our Senator gone back to see what is happening in our Senatorial zone? It's the same thing that is going to happen in the next four years. And that is the issue these young men are complaining of. There is  a growing generation of young Nigerians, who what to work for their country irrespective of religion, to move forward, to move ahead we are not applying that in solving the problem

Jonathan and transformational agenda
My impression so far is that nothing has changed. Also, yes, we can all shout that the election was properly conducted. If the  elections were free and fair, we elected free and fair people, we cast our votes freely and fairly but the compilation was not free and fair. So, some people have been imposed on the system.  There is no way anybody can tell me that my state governor won the election. Ok, people use coercion, the military was even used to suppress our people, to bring them back into power, but there are no changes going on.  Nothing is happening.

Talking about the transformation for Jonathan, he said he can actually transform the nation, you must transform the minds of the people and that transformation of the mind must start from the point of policy making and implementation. How do you transform a society? How do you transform Nigeria. For example, the poverty alleviation programme linked to Keke NAPEP, it was like in NAPEP or is it Keke Nigeria as I viewed it 15 years ago, had manufactured its own equivalent version of that vehicle, But N4 billion of our money was taken to India to a manufacturing outfit in India, and that is where   we went and imported these things.

I can show you  the photographs so you could publish. They are   here. They went to India to buy the same vehicle for poverty alleviation. Wouldn't it have been better to use N4 billion or may be, get and build a  small factory that produces that prototype, by Nigerian engineers, prototype, which is tested and is functional. Why could they not use that machine manufactured locally. That is the issue somebody; wanted to make money. They would make their money by importing it from India.