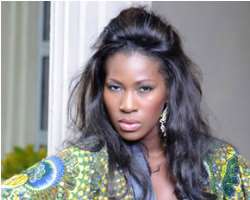 Sultry actress, Stephanie Okereke romance with CNN consultant, Linus Idahosa, is currently in turmoil as the actress has been recently disturbed by a strange woman who constantly calls her home from Canada claiming child support for Linus' love child.

Though Linus has denied the claims made by the said woman, Stephanie is said to be heartbroken as she doesn't know who to believe.