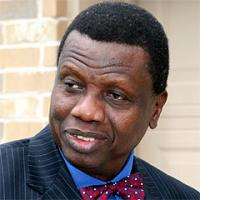 It was joy galore at the Redeemed Christian Church of God's RCCG's National Convention last night when a woman who had been barren for 20 years announced that she had given birth to triplets.

The triplets were delivered in June 2011 by the family of Pastor Oladele after the General Overseer of the Church, Pastor Enoch Adeboye prayed for them last year.

Thousands of worshippers at the convention were excited when Pastor Oladele came up with the triplets, two boys and a girl to give testimony of the miraculous work of God.

According to Oladele, the couple got married in 1991 and had been looking for the fruit of the womb since them until God did it for them in June.

The RCCG General Overseer, Adeboye, also announced that 33 more babies were born at the ongoing convention between Wednesday and Thursday.

The six babies born on Wednesday include five female and one male while the 27 babies delivered on Thursday include eight girls and 19 boys.

Adeboye had on Tuesday announced at the convention holding at the Redemption Ground, Km 45, Lagos-Ibadan Expressway, Ogun State, South West Nigeria, that 30 babies were born at the camp between Monday and Tuesday.

The announcement elicited a loud ovation from the thousands of participants at the annual convention as they glorified God for what they termed as miracle.

Adeboye said 21 girls and nine boys were born on those two days at the convention, saying that more were still expected to be delivered of their babies.

The five-day convention which kicked off on Monday will end this evening with Adeboye's ministration and blessings of thousands of church faithful.