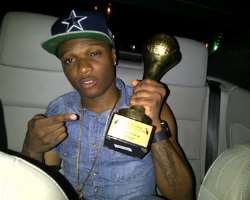 A 300level English language student of Adekunle Ajasin University has accused wizkid of allegedly stealing the hit song 'pakurumo' which she wrote and performed at a show in ado ekiti last year during the tour of a popular rapper. . . . She expressed shock at the inclusion of her song in wizkid's album.

''I bought a copy in akure and right there, track four is my song. He even retained my title of the song, but tried his best to alter the ekiti dialect that gave the song a special appeal". . . .However, she says she is not surprised his mentor sampled a popular female us- based musician's song that brought him fame. Bird of the same feather”, she claimed

"I may be poor, but I've sent the video to a lawyer and very soon, the guy will soon be exposed for who he is. I can't believe Nigerians fawn after the guy knowing well that he is not that talented, forget the voice",she added