Censors Board Finds Its Teeth 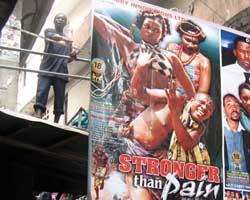 Finally, the National Film and Video Censors Board (NFVCB) has sent out a message that its bite is as good as its bark. The closure of Rolax Nigeria Limited, an unregistered and unlicensed film marketing company, located in Lagos recently is an indication that it is no longer business as usual in Nollywood.

According to the Head of Monitoring of the South West Zone of the Board, Bola Athar, the decision to shut the company was reached after NFVCB's surveillance unit discovered that Rolax had not acquired any of the Board's licences, which come in three categories: National, Regional and Community.

The NFVCB, the apex regulatory organ in the film and video industry in Nigeria, had in February 2006 announced a new framework for film distribution in Nigeria. Like what the Central Bank of Nigeria (CBN) Governor, Chukwuma Soludo, did with the banking industry, Director General of the NFVCB, Emeka Mba, rolled out a set of guidelines that will guide the distribution and marketing of films in Nigeria.

Anybody who wanted to market films was told to raise a certain amount of money depending on what category of licence he wanted. The announcement was greeted with protest in some quarters, as some people vowed not to listen to a government agency that was not there when the industry was nurtured through private sweat and blood. Mba was called names that a decent paper dare not print.

After series of meetings, compromises and adjustments, many marketers came around to embrace the framework.

On December 5, 2008, licences were given to the first batch of marketers who met the requirements to operate on a national, regional or community scale. The implication of the development was that any film marketer who had not obtained a licence could no longer operate as a film distributor in the country. Such persons can't even present their films for classification by the board.

Of course, some of them called the Board's bluff and operated side by side those who paid the required fees and met other requirements to operate illegally. One of such defaulters was Rolax.

Mrs. Athar regretted that some film marketers had continued to thwart the efforts of the Board to sanitise the distribution sector of the industry. Citing the case of Rolax, she stated that the company marketed a film titled, Oko Fulani. The film was never presented for classification by Rolax as the company was not licensed.

In her words: "Available records from the Board show that Rolax Nigeria Limited did not present Oko Fulani for censorship and classification with us. Hence, it is surprising that the company is now marketing Oko Fulani.

Accompanied by officers from Area 'A' Police Command, Lion Building, Lagos, the team stormed Rolax's office located on Agege Motor Road, to find it already locked. In spite of this, the team, which had a warrant of arrest for the owner of Rolax Films, Razaq Olabode, further locked up the shop and placed the Board's seal-up sign on the door.

Speaking with our correspondent during the week, Mba said it was not the intention of the Board to put anybody out of business. He acknowledged the contributions private individuals made to the growth of the Nigerian film industry even when there was little or no support from the government. He, however, argued that things could no longer continue on auto drive.

The Board, he said, is still using the mechanism of negotiation as well as enforcement. Some people had wondered at the seeming inability of the NFVCB to stop unlicensed operators from doing business immediately licences were issued in December. But Mba argued that "things like that don't happen overnight. We do not have our own mechanism for enforcement and have to rely on the police and other security agencies."

Having gone into partnership with various states to make its operations easier, Mba said enforcement will be made easier as time goes on. Very soon, the Kick Against Indiscipline (KAI) Brigade in Lagos may help with enforcing the law in the state. The Cross River State Government recently donated a building in Calabar to make the Board's job easier.

The Board is comforted by the fact that about 80 per cent of operators have obtained one category of licence or another. Even members of Film, Video Producers Marketers Association of Nigeria, erstwhile opponents of the framework, have made a dramatic U-turn on their hard-line position. Contrary to their former position of resistance to the policy, the group now says that, it's their task to see to the implementation of the framework to the letter.

This was the view of its President, Emma Isikaku, when he led an 11-man delegation on a courtesy visit to the Board's Abuja office on Tuesday. Only last year, the association mobilised its members against the new framework with threat of heavy penalty to any who tried to comply with the policy as designed by the Board.

According to Mba, "those who fought the idea before have now seen the wisdom in accepting it."

For those who do not want to, Mba can rely on the crusading zeal of his supervising Minister, Professor Dora Akunyili. Sisi Dora, who is now minister of information and communication, fought similar battles with drug counterfeiters while she was director-general of the National Agency for Food and Drug Administration and Control (NAFDAC).